Marquez: Lorenzo crashes show how difficult the Honda is 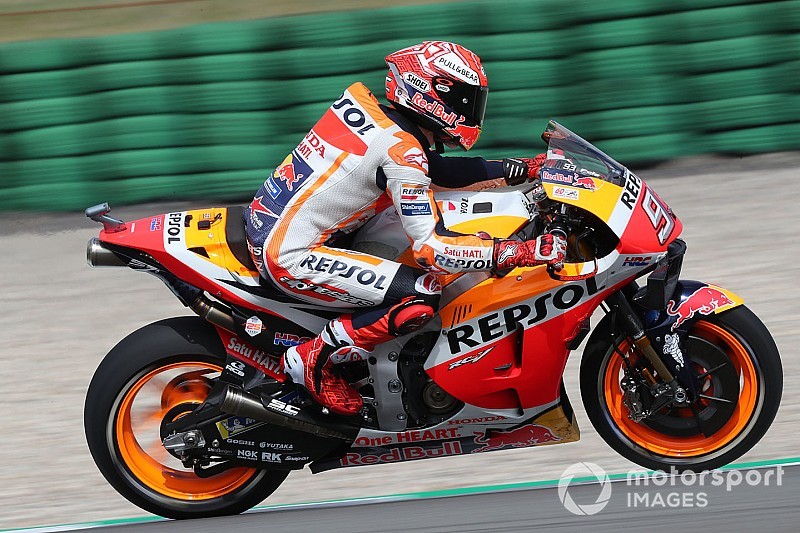 Lorenzo lost the front of his RC213V heading through the Turn 7 left-hander of the Ruskenhoek in the closing stages of FP1, and suffered a vertebra fracture which has ruled him out of the next two grands prix.

All factory Honda riders have complained about the 2019 bike being harder to ride than its predecessor, with Marquez also admitting the fast corners at Assen are showing “all these problems are there.”

“Looks like he's struggling and now he gets injured again, and looks like every time he pushes a bit more with the Honda he crashes,” Marquez said when asked about Lorenzo's crash.

“It's difficult to understand for him. But Honda is trying to help him, but I cannot lose time thinking about these things.

“I'm worried for him, but I'm just focused on my way, what's best for the team, for my championship, and that [his crash] shows that we don't have the easiest bike on the grid. But we are on top of the championship, so we need to keep going.

“Cal and me we have a very similar comment, and Takaaki [Nakagami] too. Jorge sometimes is in a different way. But we are trying to work, trying to analyse all that problems and try to improve.

“It's true in this race track that all these problems are there, especially in the fast corners. But at the moment, even like this we are able to be there and Honda is working very good.

“Already they bring some new things to try to understand.”

Crutchlow has been the most vocal critic of the '19 bike, and says its problems stem from a “combination” of changes made from its predecessor.

“Honestly, it can be a combination of many things. As I also said last year we weren't turning with the bike, we were struggling with the turning.

“The reality is it looks like our Honda and last year's Honda is turning, but it's Marc that's turning it.

“He was leaning the bike five or six degrees more than [Danilo] Petrucci in Mugello. You could see it blatantly on the TV to go round the same corner on the same line.

“We've been upside down with the thing and it feels the same. So that's why I say it's a combination, it's not just one thing.

“We have a stronger engine, but we know on the engine braking side it's more difficult.

“The physicality of this year's bike is way more than last year, and even last year's bike was more [physical] than other manufacturers. The engine braking seems inconsistent.”

Espargaro: Honda and KTM “too different to compare”