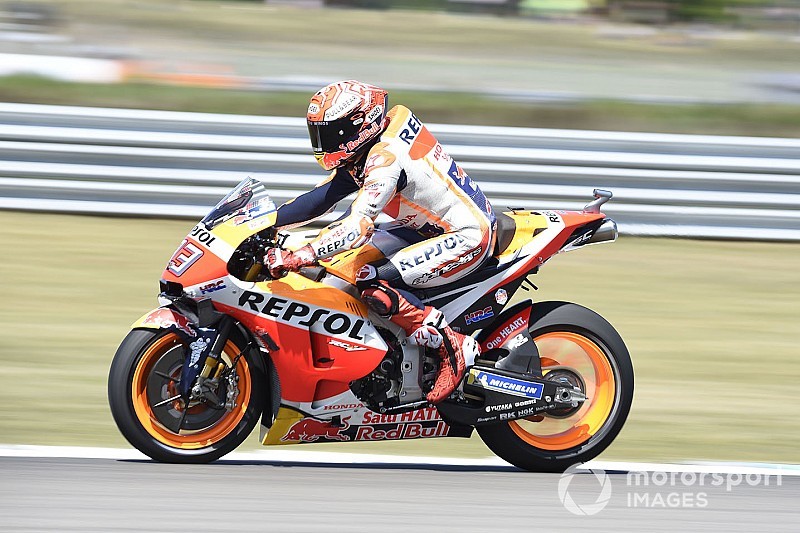 Honda MotoGP rider Marc Marquez says he “didn't feel ready to attack at 100 percent” in Dutch TT qualifying, and admits third was the maximum he could have hoped for.

Marquez was seven tenths off of poleman Fabio Quartararo at Assen, and qualified off the front row in fourth for the first time this season.

Commenting afterwards, the Honda rider says he didn't feel comfortable to push at his maximum, and was unwilling to risk suffering injury through a fast crash with the German Grand Prix just one week away.

“In the qualifying practice, I didn't feel ready to attack at 100 percent,” Marquez stated.

“This race track, if you don't feel ready to attack you need to be careful because if you crash, normally the speed is very high, and two races in a row are coming.

“So this is another point, and today we are not on the front row but we are fourth. We tried to make another strategy, push in the first run.

“But it's true in the second run the strategy was not working in the best way. But even [if we improved] this, the best position today after checking the laptimes was third position.”

Marquez exited pitlane for his second run in Q2 behind main championship rival Andrea Dovizioso, but admits his he never intended to use the Ducati rider as a reference.

However, when he realised Dovizioso – who trails him by 37 points in the standings – was sitting outside of the top 10 at that point, he says he didn't want to pass him on track and allow him to follow.

“In the first part of the run, I felt good and I pushed and I did a two laps in a row in a good laptime,” he added.

“There I felt strong. In the second run I wait till everybody goes [out of the pits in front], but then I go out and Dovi was there, and honestly this time I didn't try to find him.

“But I check the positions and Dovi was very far [down], so I say 'OK, he's the second guy in the championship, I will not push'.

“I prefer to slow down and forget the laptime. Then I tried to do a good laptime, because he was far [ahead], but then he was riding slow and I caught him very early [in the lap].”

Petrucci: Assen qualifying "one of the worst" moments of 2019