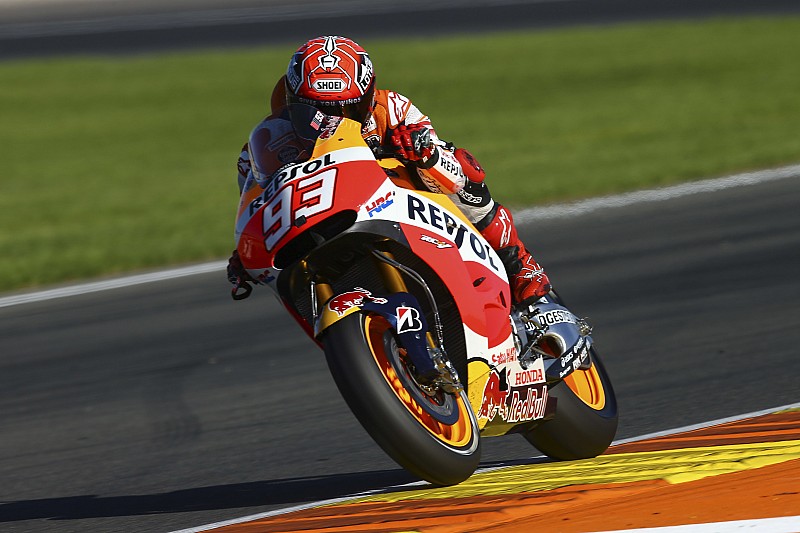 Honda's MotoGP factory riders Marc Marquez and Dani Pedrosa have admitted managing tyre temperatures is likely to be the key challenge to their victory bids in Sunday's Valencia Grand Prix.

While several riders have suggested that the compounds offered for the race by Bridgestone were too soft for the Valencian heat, the Hondas in particular struggled with managing the temperature of the front tyre.

"Normally, with Honda we are pushing a lot to the front tyre and normally we are using hard front tyre but here nobody expected this temperature," Marquez said.

"It looks like tomorrow they say it'll be a little bit colder, maybe that'll help us," he added.

Pedrosa, who qualified third to Marquez's second, was slightly more upbeat, saying: "We were here yesterday with not the best feeling because, maybe, these problems with the tyres.

"Today, we did some improvement already, so our pace is better and more comfortable. This gives us more confidence."

Lorenzo says "every rider" will struggle with tyres

Championship contender Jorge Lorenzo, who will head Marquez and Pedrosa on the front row, suggested that nobody in the field will be immune to tyre woes.

"It is difficult for both tyres," he reckoned. "When you don't have the rear grip that you have in the first two laps, also the front is pushing more on entry of the corner. I think every rider will have this problem tomorrow."

"We are going to try, but for sure in the middle of the race to the end, it'll be quite hard because the front tyre is quite soft for the conditions."