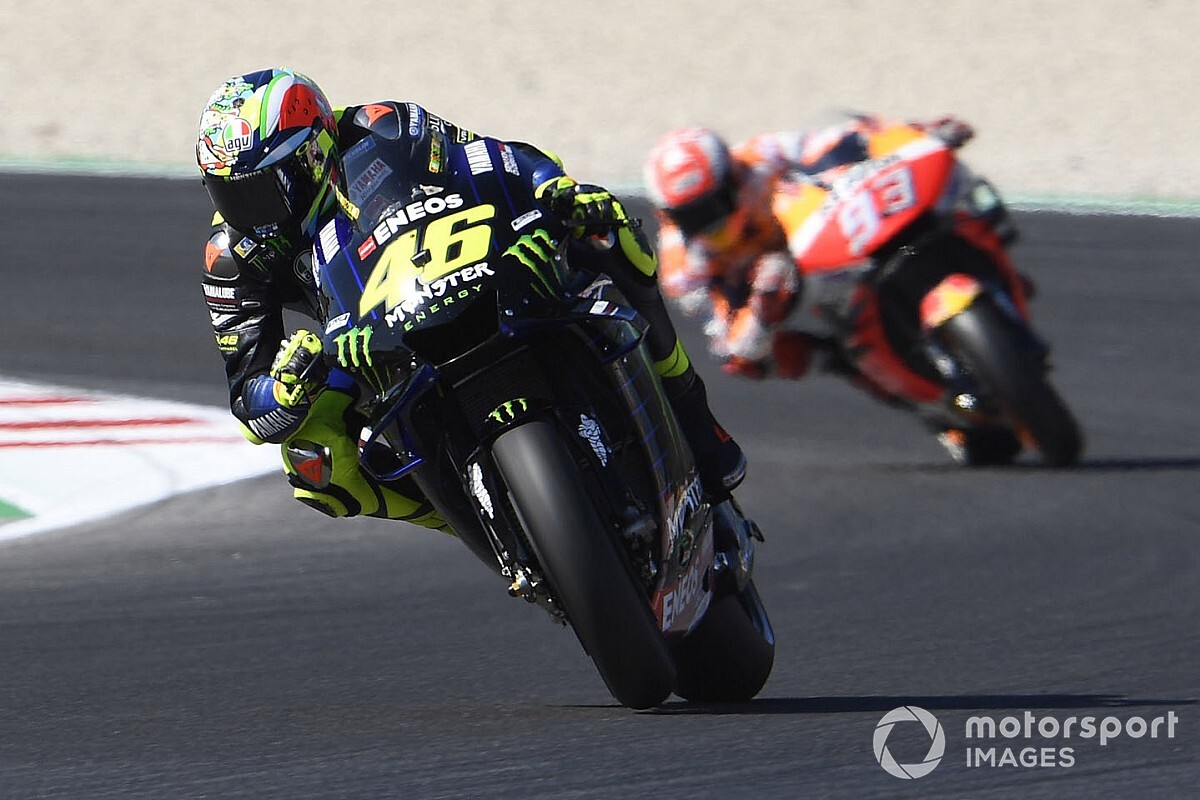 MotoGP championship leader Marc Marquez says he was puzzled by rival Valentino Rossi’s “intention” in their run-in during Misano qualifying.

Marquez was tucked in behind Rossi on his final lap in qualifying, and was on course for a front row spot when he overtook the Italian down the inside of the high-speed Curvone right-hander.

But Rossi stayed with Marquez through the final sector and went for an overtake down the inside of Turn 14, with Marquez only just avoiding a collision as he cut in from the outside to take the corner.

The incident forced Marquez to back out of his lap and consigned him to fifth on the grid, with he and Rossi summoned to race direction – and speaking to the media prior to seeing the stewards, Marquez expressed his surprise over Rossi’s actions.

“At the moment even I didn't understand what happened, because that kind of overtake in qualifying practice is a little bit strange,” Marquez said. “I don't know which was the intention, you must ask him.

“Anyway I will explain from the beginning, to be clear - because people will say 'ah, because he was following again Valentino', but it was not like this.

“I go out from the box, you can check that I go out and I was completely alone, with the last tyre, then when I arrive on the back straight, Valentino was waiting, was riding very slow, and then just I stopped behind him, because I was in front of him in the standings [classification].

“We start the last lap, I just put some gap between us, and then when we go out from Turn 6, already he touched the green [paint], so his lap was already cancelled then. And then I saw that he was riding fast but not super-fast.

“I had the chance to overtake him in the back straight. Then when we arrive in Turn 14, I just go in, I saw one bike black and yellow arriving very very fast inside with a speed that is impossible to [make] that corner [with].”

Marquez conceded he himself had run out wide on the green paint while overtaking Rossi at Curvone, but said he wasn’t sure on the bike whether this was the case.

Asked whether he could imagine what Rossi’s intention was, Marquez said: “Of course I can imagine, but I cannot say, because you must trust him and he will explain. But I know his answer – [he’d say] that he tried to overtake me and went wide.”

Marquez insisted he had come very close to crashing, with his leg slipping off the foot rest.

“Of course was an aggressive reaction because I didn't expect,” he added. “I didn't expect because his lap was also cancelled, because in the exit of Turn 6, and this is important, he already touched the green.

“For that reason it's difficult to understand which was the intention.”

Iannone ruled out of Misano due to shoulder injury

Inside the mind of a thrill seeker