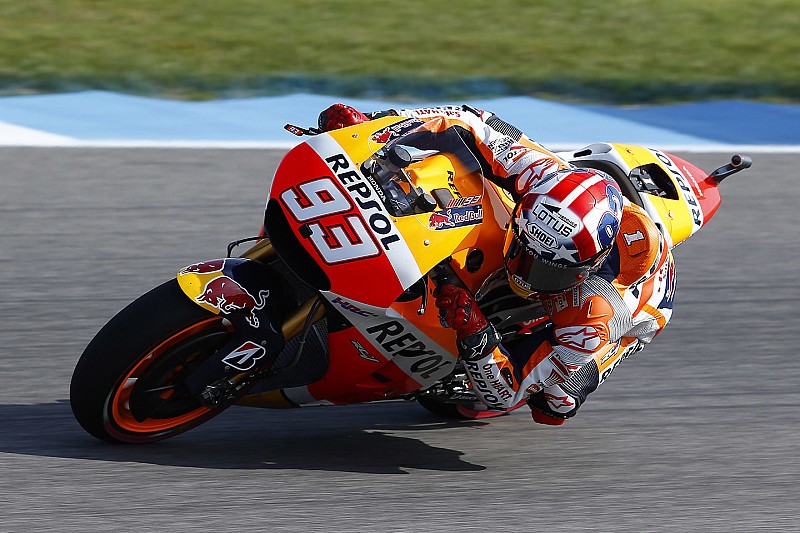 Defending MotoGP champion Marc Marquez is under no illusions as to the scale of the challenge that lies ahead if he is to challenge for the 2015 title after his victory at Indianapolis.

A third win of the season at the Brickyard after a hard-fought battle with Jorge Lorenzo allowed Marquez to reduce his points deficit to championship leader Valentino Rossi by nine to 56 with eight races remaining.

Although the Spaniard said he still “believes” he can fight for a third successive premier class crown, he acknowledged that it will be “really difficult” to consistently beat the two Yamaha riders and claw back the points he lost with his non-finishes in the first part of the season.

“For me, the target is to win races,” said Marquez. “Of course the other results, like Jorge second and Valentino third, are not in my hands.”

“We were 65 [points behind], now we are 56, so we are closer and we still believe [it’s possible to catch] – but we must be honest, it will be really difficult.

“Here [at Indianapolis] we were able to win, but both Yamaha riders have really good pace and if we want to beat them every race, we must work a lot.”

Victory at Brno will be tough

Marquez also conceded that he would have his work cut out to challenge the Yamaha duo at this weekend’s race at Brno, a track where his incredible winning streak of 10 races came to an abrupt end last season.

“We know if we want to be with the Yamaha riders [at Brno] we must work a lot,” added the 22-year-old.

“I followed Jorge for a lot of laps [at Indy], and Valentino at Assen, and I saw that they have a really good potential, especially exiting corners and on acceleration.

“But we are working on this area to try to improve.”

Nicky Hayden: “I’m not ready to quit MotoGP yet”