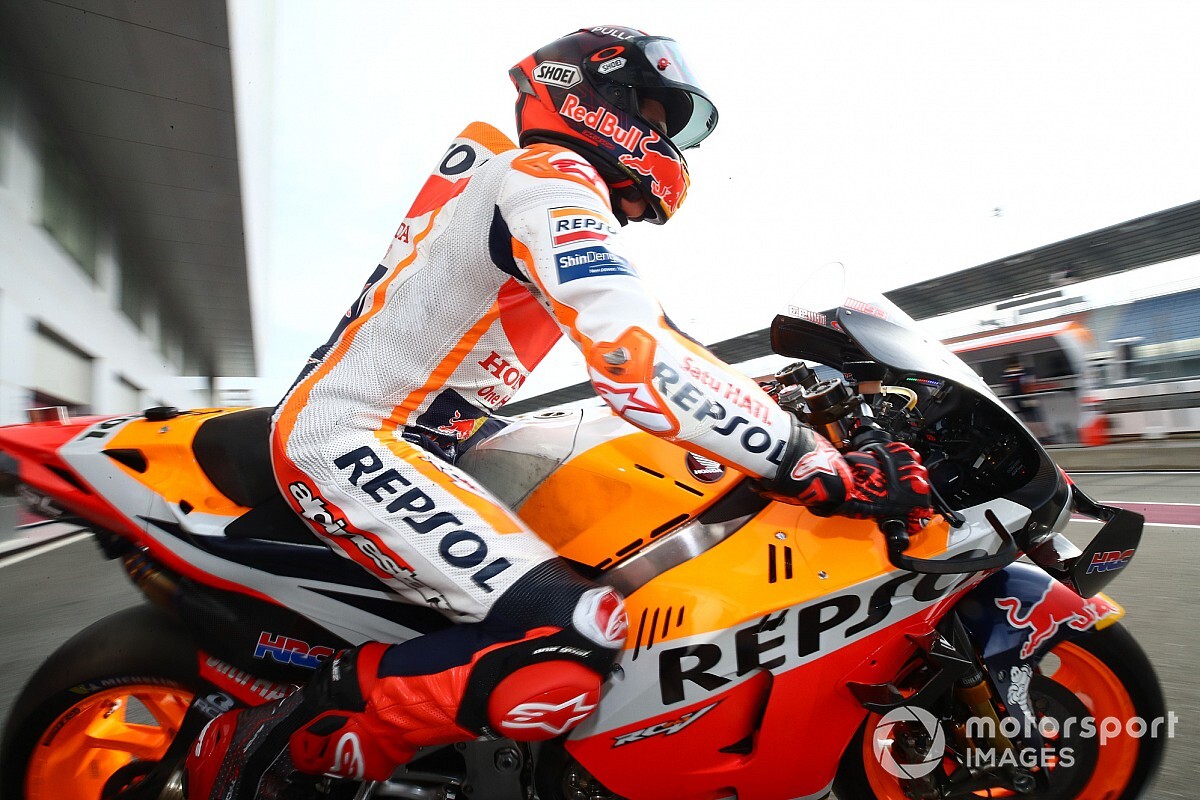 The opening round of the 2020 campaign in Qatar had to be cancelled due to the coronavirus pandemic, with only the Moto2 and Moto3 classes racing at Losail having already been in the country for their final pre-season tests.

Save for private outings for KTM, Aprilia and several of the manufacturers’ test teams at Red Bull Ring and Misano over the last month, there has been no MotoGP running since February’s Qatar test.

With such a long time off the bike, two 90-minute test sessions have been scheduled for Wednesday to allow the riders to get back up to speed before first practice on Friday.

The early part of the session was topped by reigning world champion Marquez, the Honda rider now fully recovered from off-season shoulder surgery.

Honda had a troubled pre-season, with it only making a breakthrough on the final day in Qatar when it discovered its turning issues were being caused by the now-abandoned 2020-spec aero fairing.

Yamaha’s Maverick Vinales, who was fastest at the end of testing in Qatar, briefly took over from Marquez with a 1m38.873s on the much-improved M1.

Aleix Espargaro, having led the opening laps, guided the all-new Aprilia to top spot with around 50 minutes of the session to go.

His 1m38.873s was quickly countered by Marquez, before Pramac Ducati’s Jack Miller leaped up to the head of the field with a 1m38.775s.

Improving to a 1m38.348s, the works team Ducati-bound Miller looked set to hold onto top spot as the session entered its final staged, but for a final salvo of quick laps to demote him to seventh.

Marquez’s late effort of 1m37.941s put him underneath his race lap record from last year to see out the morning fastest of all ahead of Suzuki’s Alex Rins and the works team Yamaha of Valentino Rossi – whose 2021 Petronas SRT deal is expected to be announced imminently.

Tech 3’s Miguel Oliveira was top KTM runner in eighth place, just under half a second off the pace, as he gears up for his sophomore campaign, while Franco Morbidelli (SRT) and Francesco Bagnaia (Pramac) rounded out the top 10.

KTM’s Pol Espargaro and Vinales were shuffled out of the top 10 into 12th and 13th respectively, having occupied the top positions earlier, while Tech 3’s Iker Lecuona was top rookie in 16th.

Andrea Dovizioso’s first outing on a bike since breaking his left collarbone in a motocross crash last month ended with him in a low-key 19th ahead of teammate Danilo Petrucci – the pair following the sister factory team Honda of Alex Marquez.

The MotoGP thriller that will define a halcyon age