© 2021 Motorsport Network. All rights reserved.
TV Buy tickets Store
Previous / Rossi: Size difference to Vinales is a disadvantage Next / Why KTM must be wary of 'the Pedrosa factor'
MotoGP / Malaysian GP / Breaking news

Marquez: Suzuki can now fight for the MotoGP title 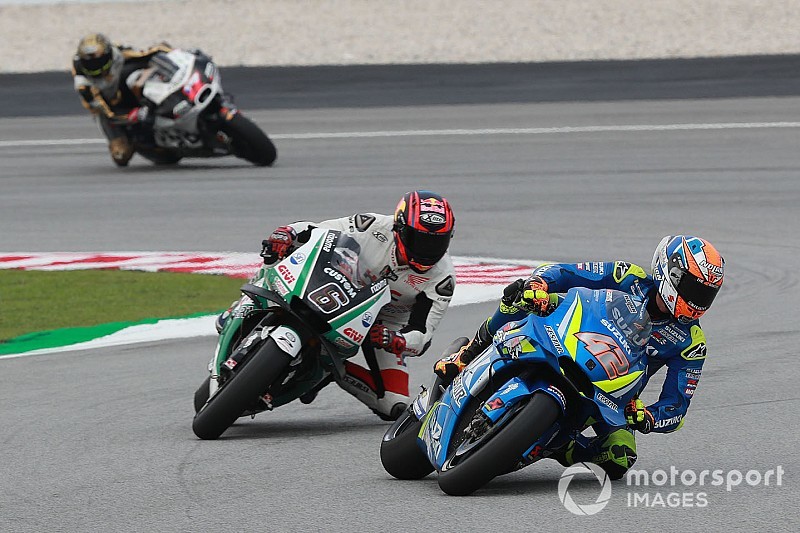 Suzuki has improved considerably since its difficult 2017 season, and Marquez claimed it could win races as early as the Qatar opener, which was followed by three podium finishes by the team.

While Suzuki has yet to win this year and had a mid-season slump, it is enjoying a competitive end to the season with three podium finishes in the last four races - including second last time out in Australia for Andrea Iannone.

Suzuki had a strong start at Sepang as well with Rins topping second practice on Friday, and Marquez reckons Suzuki can now challenge for the title.

"No, it was not a surprise [to see Rins first], Suzuki is working good, I think the bike is ready to fight for the championship," said Marquez, who was Rins' closest challenger in FP2.

"Already in the races, they are riding a very good way since Aragon so the bike is competitive. They have very good turning in the middle of the corner.

"Maybe the weak point of Suzuki is the top speed, but when you are behind them, the turning, is so good.

"This is one of the strong points of Suzuki and also the grip on the exit of the corners. The top speed is not the best one but the acceleration is really good."

Maverick Vinales added that it is now "normal" to see Rins at the top as Suzuki has been strong in several weekends.

"He is good, it didn't surprise me," commented the Yamaha rider, who was fourth-fastest in FP2. "The Suzuki was in a great shape in Phillip Island, Japan, Aragon so it is normal.

"Both riders are great, so it is normal the Suzukis are there at the top. I remember '16 [when I was with Suzuki], in FP3 I think I was first.

"The bike works here really good, so not only are Marc and [Andrea] Dovizioso gonna go fast in the race, also Alex is going to be there."

Rossi: Size difference to Vinales is a disadvantage

Why KTM must be wary of 'the Pedrosa factor'