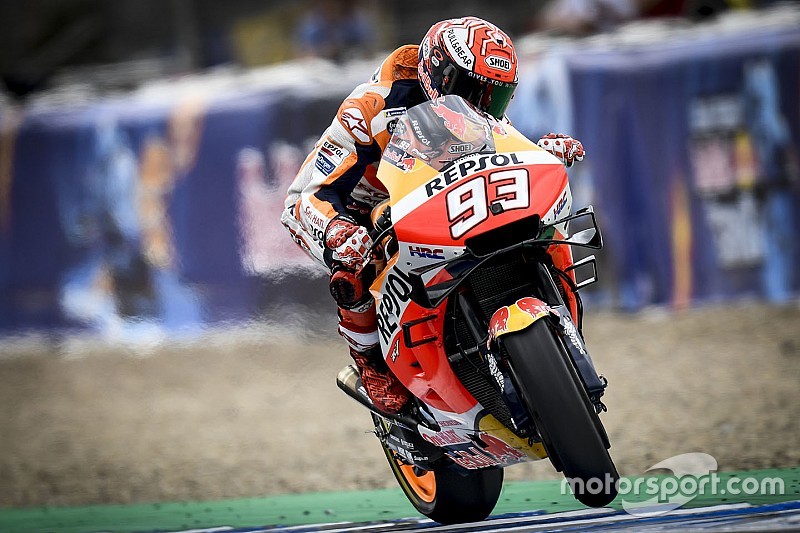 Reigning MotoGP champion Marc Marquez set the pace in the Sunday morning warm-up at Jerez despite Honda's streak of mechanical problems continuing on his bike.

Marquez lost drive in his bike on the exit of the final corner of his first lap, and fell off the RC213V as he tried to duck into the pits instead of going onto the main straight.

But Marquez quickly refired his bike and reached his garage, re-entering the track on his second Honda a few minutes later.

Though he nearly crashed that one as well following a big rear tyre slide at Turn 2, Marquez took the lead from Franco Morbidelli with five minutes on the clock.

Maverick Vinales eventually did a 1m37.9s before the session ended but Marquez still comfortably topped the warm-up, with a gap of 0.341s.

Suzuki's Joan Mir grabbed third after the chequered flag fell, demoting Franco Morbidelli, who had led for a few minutes before Marquez took over.

LCR Honda's Takaaki Nakagami was fifth followed by Aleix Espargaro - whose Aprilia teammate Andrea Iannone withdrew from the Spanish GP following a Saturday crash - but the Spaniard set his best time with a soft rear tyre.

Jorge Lorenzo led in the early stages but ended up 11th, ahead of top KTM Pol Espargaro, as Valentino Rossi continued his underwhelming weekend in 15th.

The Jerez MotoGP race as it happened