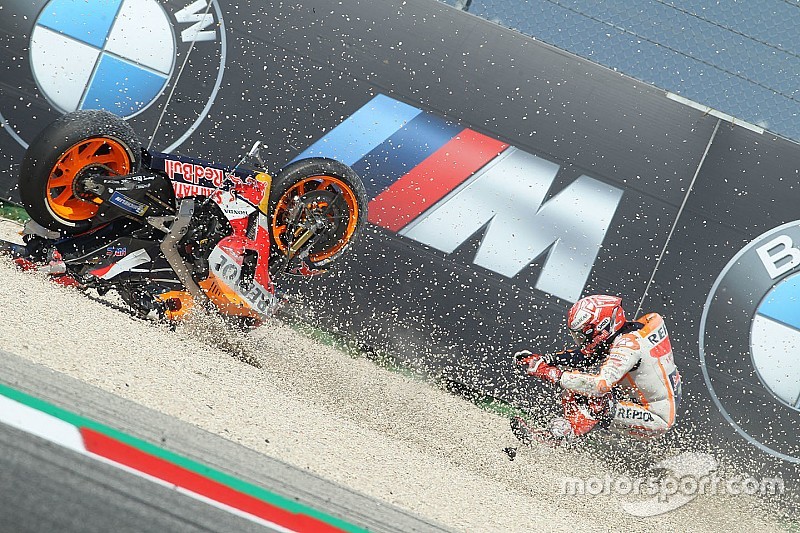 MotoGP championship leader Marc Marquez says his crash in qualifying at Misano left him with “a small stone” in his eye for his final run.

Marquez was pushing to challenge Ducati rider Jorge Lorenzo's provisional pole time when he crashed at the Turn 15 left-hander and rolled through the gravel.

He was back on his feet immediately, however, and quickly hitched a ride on a scooter before sprinting through the paddock and mounting his other Honda RC213V bike.

However, despite having time to do two more flying laps, Marquez couldn't improve his time and was shuffled down to fifth by the end of the session.

“Look, it's not an excuse - but when I crashed, the visor opened,” Marquez explained afterwards. “And then I was so quick to take the second bike, and I had a small stone in my eye.

“Was so difficult to be precise, was difficult to concentrate. And then when I arrive in the box I put water [in my eye], I was okay, then they took out the stone.

“Even the guy with the scooter was pushing a lot. It was scary sometimes because [I feared] we would crash, but he did a great job. And yeah, then unfortunately I wasn't able to improve the laptime but [it] was okay.”

The crash happened on the second of Marquez's three planned Q2 runs, and the Spaniard said the risk of an accident had played a part in his choice of strategy.

“It's a strategy in case [something happens] - because I already felt like, 'hmm, maybe in qualy we will see what happens', because you feel already when you have a big chance to crash or less - and this time I knew that was a risk.”

Marquez said the large difference between the medium rear tyre he used in race pace simulations and the soft compound he ran in qualifying was a factor in the crash, as “the balance of the bike was changing quite a lot”.

As he folded the front tyre at Turn 15, he tried to lift himself back up with his left elbow before ultimately giving in and letting go of the bike.

“The thing is that I lost the front too early, when I don't expect, because I lean the bike too aggressive," he explained.

“I expect always to lose later, and then I was not ready with the elbow. I tried to save but I felt I was coming to the gravel, the wall, and I put down my shoulders that are important to protect [from injury].”

“This one was a big crash, and it's important to be fit.” 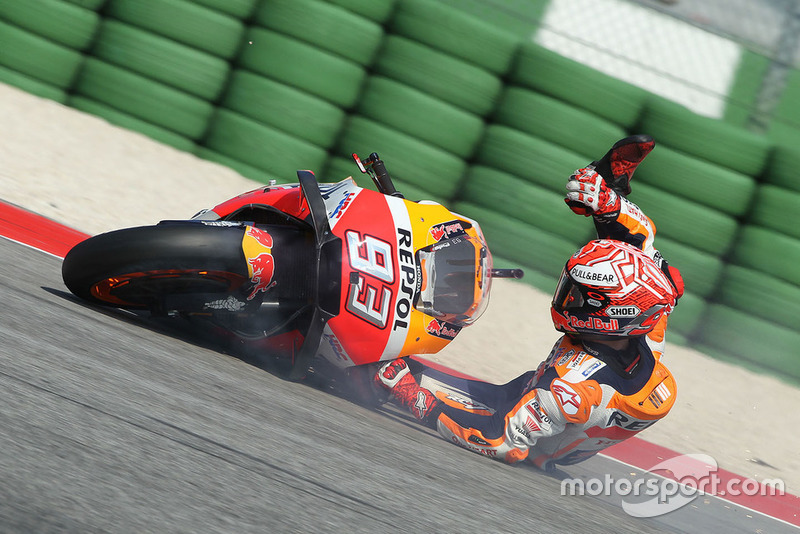