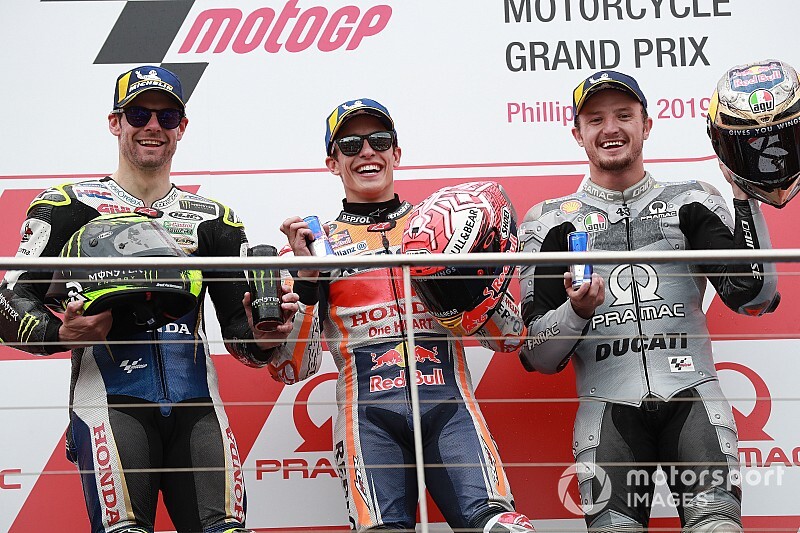 Both riders started from the front row but had slow getaways, meaning it was Valentino Rossi in the lead on his 400th GP start with Cal Crutchlow and Andrea Iannone forming an unusual top three behind the Yamaha rider.

Fabio Quartararo's attempts to score a maiden MotoGP victory ended after just two corners when he went wide at Southern Loop and was at the exact wrong spot to be hit by the high-siding Danilo Petrucci behind him.

Rossi's lead lasted for three laps before Crutchlow took over, and the Yamaha man lost several positions in quick succession, dropping as low as seventh.

Iannone put his Aprilia in the lead with a Turn 10 move, but Crutchlow slipstreamed past him on the main straight.

The Briton cemented his lead for the next few laps while Iannone duelled with Marquez before Vinales, recovering from a slow start, overtook both in quick succession, and also passed Crutchlow at Turn 4 on lap 10.

To stay with Vinales, Marquez barged past Crutchlow at Lukey Heights, and top two quickly pulled away from the rest, the duo in a class of their own.

Marquez shadowed Vinales for the remaining 17 laps of the race, the gap between the duo less than a tenth in the last seven times they crossed the line, but the Honda rider waited until the last lap to make his move.

He slipstreamed past Vinales on the main straight and held off Vinales at Turn 4, where the Yamaha man had passed Crutchlow.

Vinales lined up a move for Turn 10, where his earlier move on Marquez took place, but he crashed as he exited Lukey Heights and Marquez took the chequered flag on his own.

He scored his 11th win of the season and his fifth in a row, surpassing 500cc legend Mick Doohan to become Honda's most successful premier-class rider in terms of wins.

Vinales's crash gifted Jack Miller a podium finish on home soil as he beat his Pramac teammate Francesco Bagnaia by half a tenth.

Bagnaia, like fellow rookie Joan Mir behind him, celebrated the best result of his rookie season.

Alex Rins was a disappointing ninth despite running fourth at one point while the top 10 was completed by the second Aprilia of Aleix Espargaro.

Johann Zarco finished 13th on his debut with LCR Honda while Jorge Lorenzo finished dead last in 16th, over a minute behind Marquez.

Tito Rabat and Mika Kallio both failed to finish the race.

Australian GP - the race as it happened

Vinales would "rather end up on the ground than second"