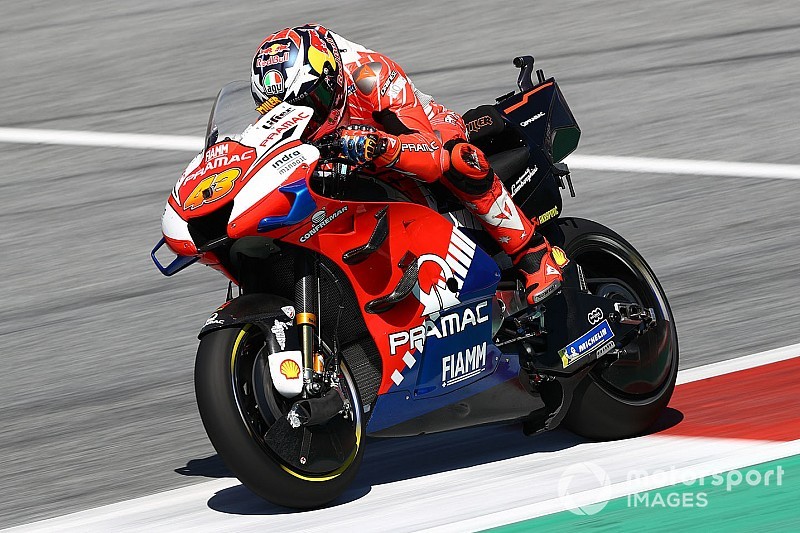 Pramac Ducati rider Jack Miller feels he “wasted” a near-guaranteed podium finish by crashing out of the Austrian Grand Prix at the Red Bull Ring.

Miller ran as high as second in the opening stages of the race, and was chasing after Petronas Yamaha rider Fabio Quartararo for third place when he slid off at the penultimate corner on the eighth lap.

“I felt I had my hand basically already on the podium, because I could [that] see Fabio maybe didn't have the best pace, as we did,” Miller said.

“But through one way or the other, every time I get close to him, he'd decelerate a lot quicker than I would. I nearly ran up his backside in Turn 4, one time I lost about half a second, worked back to it, and then yeah, just a small mistake.

“I know exactly what happened, what I did wrong - this is what makes it even worse, you know. Because I felt everywhere really in control, I was managing the rear tyre a lot and felt good for the end of the race, but it’s a real shame.

“I'm gutted today to be honest, because it was a solid podium that we wasted. [A small mistake] with big consequences.

“I could've quite easily let the brakes off, rolled outside onto the green stuff, maybe lost a second and then come back in and worked my way through. But it wasn't to be today.”

Miller said the Dunlop rubber laid down by the support classes off the racing line contributed to his crash.

“Already on the sighting lap I could see in the last sector there was so much Dunlop rubber on the ground, like big streaks of Dunlop rubber everywhere off the line," he explained.

“You didn't really want to be running wide in the first half of the race, and that's exactly what I did.”

When asked whether he felt he could’ve featured in the duel between Marc Marquez and Andrea Dovizioso for victory, Miller believes he wouldn’t have been far off their pace.

“I felt like I could run consistent [1m]24s, 24.5s, but their rhythm was quite similar and especially when they started sort of chopping and changing towards the end I felt like I had that rhythm, for sure," he said.

“I think I could've stayed with them - whether or not I would've been in the battle, I don't know, but it would've been nice to be behind them, in a great spectating position, that's for sure.”

More from the Red Bull Ring:

Pedrosa: Replacing Zarco at KTM is “not my plan”