Pramac Ducati MotoGP rider Jack Miller admits he let himself down by crashing out on the third lap of the San Marino Grand Prix after starting from the front row.

Miller had earned plaudits by recovering from his recent slump in form by securing a front-row starting slot at Misano, qualifying second only to the works Ducati of Jorge Lorenzo.

But the Australian couldn't capitalise on this speed, slipping to fourth before losing the front end of his GP17 on the third lap of the race at Turn 14. He managed to resume but ended up out of the points in 18th place.

"A small mistake, by me," Miller admitted. "On the full fuel tank, I was losing a lot in acceleration onto the back straight, out of Turn 6, and I was just trying to stay with them.

"Just went into Turn 14, right at the apex, we went a little more preload [on the fork] and dropped the front, so the bike's ride height was more or less in the same spot, we were just squishing the front tyre too much, especially with the full tank.

"And yeah, just got to the apex, lost the front, couldn't hold her up. So, really disappointed. A small mistake cost us an awesome weekend.

"We just have to move on and take the positives out of it, I picked the bike up, the pace was still really good, with bent handlebars. Did the race distance and, you know, I'm sure that we had potential, just couldn't put it all together this weekend. I feel disappointed, let down let's say, by myself."

Asked where he felt he would have finished, Miller replied: "Fourth, fifth, sixth, I think. From [Cal] Crutchlow back. Those three at the front had some pace, you know. I had Marc in front of me for the lap, and he didn't really gain on me.

"Yeah, I think would've been difficult over a race distance, to stay with him, today. Although my tyres held up really will. I think with [Alex] Rins, Maverick [Vinales], that sort of group, I think we could've stuck in."

Despite his weekend ending in disappointment, Miller said he would take encouragement from one of his strongest weekends of the season heading into the upcoming races.

"It's been a good weekend apart from today," he said. "Even though I did crash in the race and we didn't get the result we wanted, we still had good pace, we were quick even after the crash.

"[I'll] go home and work on it and come back strong in Aragon, we did the test there and we were really strong, got some of my favourite circuits coming up now, Aragon, Thailand, Japan, Australia, I'm really looking forward." 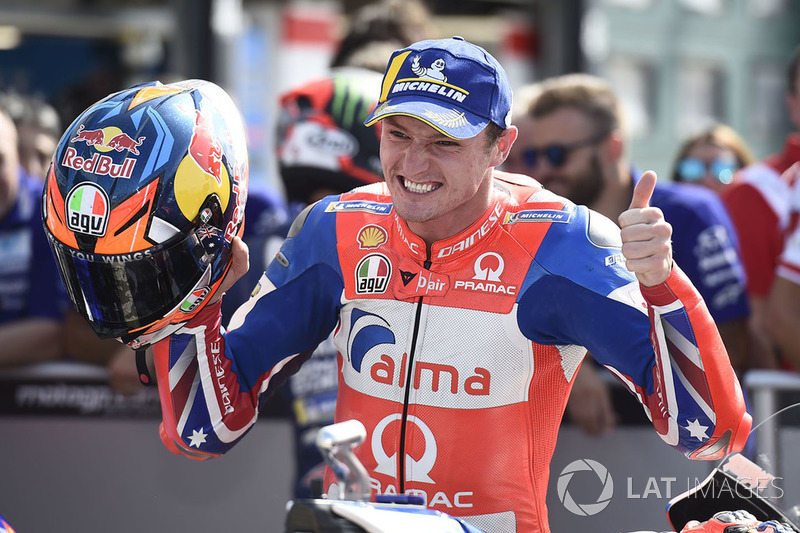