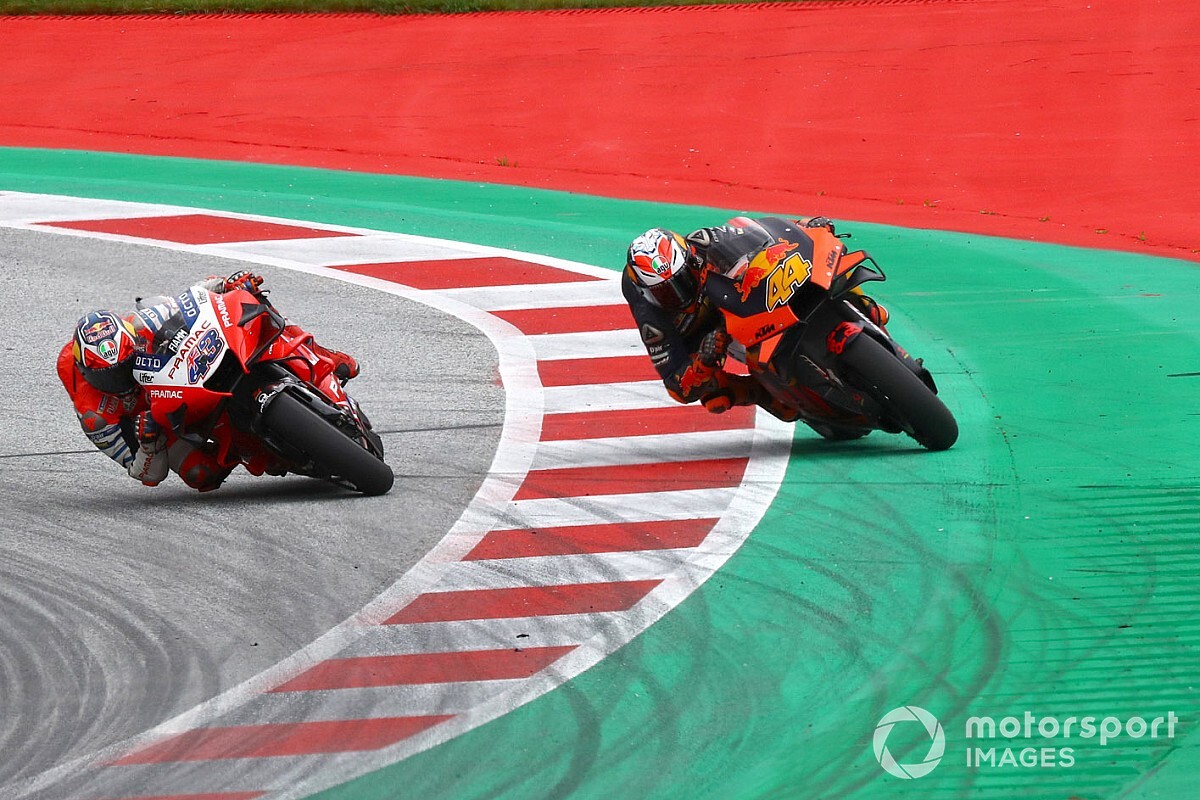 Joan Mir is "angry" that Pol Espargaro was not forced to drop a place from third in the MotoGP Styrian Grand Prix for exceeding track limits at the final corner.

KTM's Espargaro was battling with Jack Miller for victory in Sunday's restarted Styrian GP at the Red Bull Ring when he was forced out wide by the Pramac rider at the last corner.

This allowed Tech 3's Miguel Oliveira through to take his maiden victory, while Miller was second and Espargaro re-joined to finish third.

However, fourth-placed Mir was "surprised" the KTM rider was allowed to keep his podium as the rules state any last-lap abuse of track limits is awarded with an automatic place drop.

This happened to Jorge Martin in the Moto2 race, which stripped him of victory, while Suzuki rider Mir was forced to concede his lead on lap one of the original MotoGP start when he was deemed to have gained an advantage from running off track.

"I'm really, really angry about the decision at the moment, because it's not fair," Mir said.

"Martin [in Moto2] didn't win the race because he go onto the green [run-off] and he didn't gain anything.

"And I agree that you don't penalise somebody that is in front and another rider touches him and kicks him off track. In that point, I agree about the decision for safety.

"Of course he went wide, because if you go into that corner with that speed, of course you go wide.

"And then we can see, when he touched the green, he just opens [the throttle] full. What happens if that was gravel, because he's out of the track? It's green [paint] for our safety, but he was out of the track a lot.

"For me, it makes no sense [if] you don't penalise this."

Mir stressed that his grievance wasn't with Espargaro and praised his race, but feels Race Direction must stick with its own precedents.

"He did a great job and an awesome race, but I'm really surprised about Race Direction and really angry."

There has been no notification from Race Direction that the incident is to be reviewed.

Espargaro believes he was penalised enough for losing two positions when Miller forced him wide.

"Sure, I went to the green [run-off], but because they took me there," Espargaro argued.

"They couldn't penalise me, because they would have done it twice: I had already lost two positions, so losing another to going [off onto the] green would have been too much."