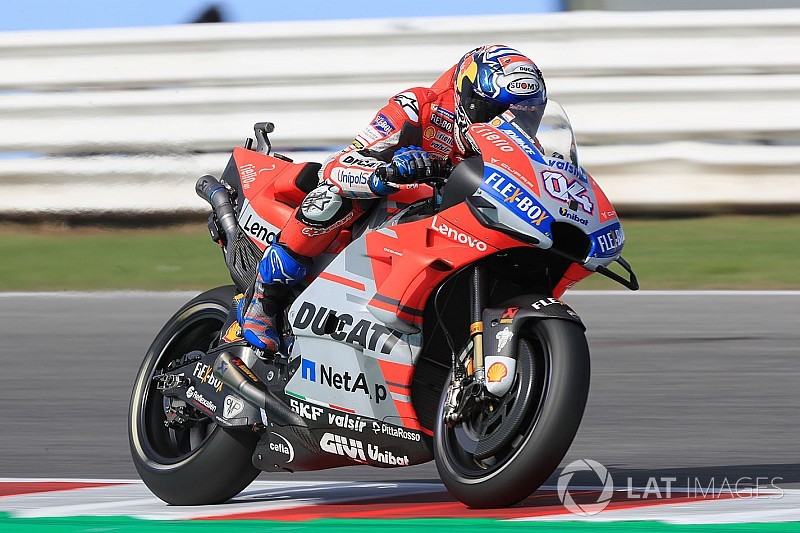 Ducati duo Andrea Dovizioso and Jorge Lorenzo locked out the top two in MotoGP's second practice session at Misano, as Valentino Rossi fought his way inside the top 10 late on.

Marc Marquez, along with Rossi, ended FP1 outside of the top 10, and with rain potentially arriving in both FP2 and FP3, they were at risk of missing out on making Q2 automatically.

But conditions stayed dry during the 45-minute session, and it took Marquez two flying laps to beat Dovizioso's FP1 benchmark and lead with a 1m32.537s.

Only Ducati wildcard Michele Pirro set a comparable laptime for most of the session, but the Italian was also nearly half a second off the pace.

Marquez stayed on top until the final two minutes of the session when he was finally demoted by first Lorenzo and then the Spaniard's Ducati teammate Dovizioso.

Dovizioso ended the session with a 1m32.198s, with Lorenzo completing a Ducati 1-2.

Works Honda rider Marquez did not improve in the end and dropped as low as fifth ahead of Danilo Petrucci (Pramac Ducati) and Alex Rins (Suzuki).

Like Marquez, Rossi also recovered to end the day within the top 10, but his place was in doubt until the dying stages as he was held up by Karel Abraham during one of his late laps.

But the local hero managed to improve to eighth ahead of his protege Franco Morbidelli (Marc VDS Honda) and Tech 3 Yamaha's Johann Zarco.

However Zarco, despite taking 10th, is not currently set to make it to Q2 automatically as Andrea Iannone's FP1 time puts the Suzuki rider eighth overall.

Iannone was only 16th in FP2 as he was one of three riders to crash at Turn 15, alongside Scott Redding and Takaaki Nakagami.

Hafizh Syahrin and Jack Miller suffered their second falls in as many sessions, their incidents occurring at Turn 8 and 16 respectively.

KTM's Pol Espargaro, returning from injury, languished down in 24th, only beating Syahrin (Tech 3) and MotoGP debutant Christophe Ponsson (Avintia Ducati), who cut his FP1 deficit by some one-and-a-half seconds and was 5.9s off the pace, putting himself within the 107% limit.