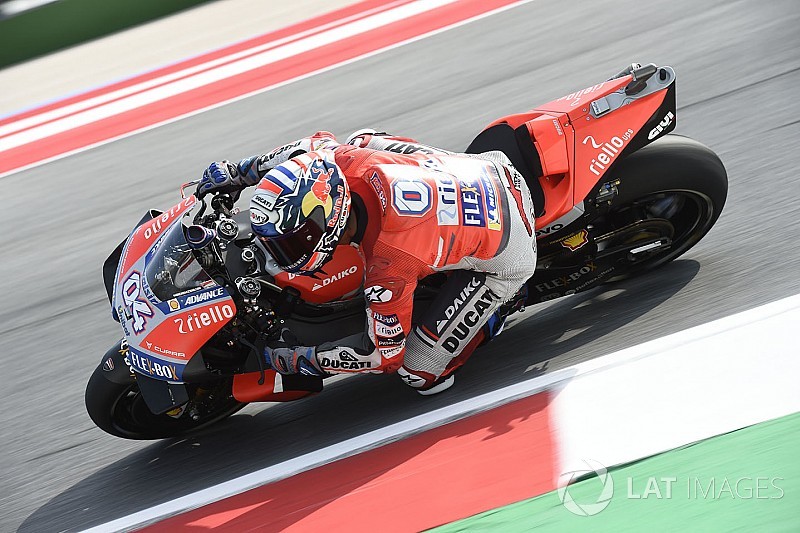 Ducati's Andrea Dovizioso set the pace in the opening MotoGP practice session at Misano, as both Marc Marquez and Valentino Rossi were outside of the top 10.

Dovizioso led in the early stages of the 45-minute session, but he was demoted by both the Yamaha of Maverick Vinales and Honda's Marquez at the halfway mark.

Lorenzo's lead was short-lived, however, with his teammate Dovizioso moving ahead thanks to two consecutive 1m32.6s laps.

He topped the session by 0.101s from LCR Honda's Cal Crutchlow, the Briton edging Vinales out by three hundredths.

Dani Pedrosa was six tenths off the pace in seventh on the best of the works Hondas, ahead of Johann Zarco's Tech 3 Yamaha and Danilo Petrucci's Pramac Ducati.

Marc VDS Honda rider Franco Morbidelli impressed in 10th as both Marquez and Rossi did not switch to a fresh soft rear tyre in the end of the session and ended up only 13th and 15th respectively.

Ducati wildcard Michele Pirro, making his first MotoGP outing since his horror crash at Mugello on board a fourth GP18, was 16th, while Honda tester Stefan Bradl was 20th-fastest.

Xavier Simeon, riding the injured Tito Rabat's Avintia Ducati GP17, was 23rd, with his own replacement Christophe Ponsson ending the session last, 7.4s off the pace - missing the 107% cutoff by a full second.

Brad Furr Racing's Harper is Crew Chief of the Year