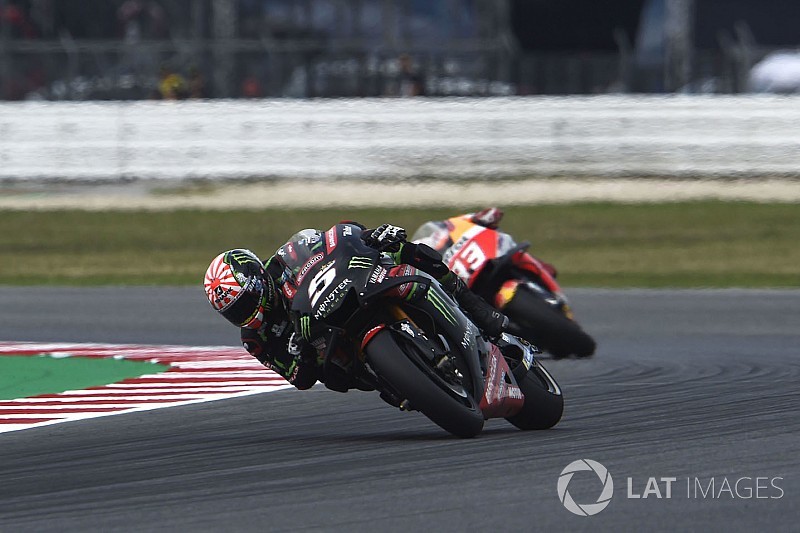 Johann Zarco and Jack Miller were first and second in the damp third MotoGP practice at Misano, both riders earning a spot in Q2 as a result.

The session started in damp conditions, and most of the field decided to stay in pits in the early stages, with only a few riders completing one lap on wets.

The only three riders lapping on slicks from the get go were Alvaro Bautista, Dani Pedrosa and Zarco, with Bautista setting and then repeatedly lowering the FP3 benchmark.

The Nieto Ducati rider's first lap was a 1m44.251s but the pace improved by eight seconds during the next 15 minutes and, when Pedrosa finally demoted the World Superbike-bound Spaniard, others started to venture out on track as well.

Pedrosa still led for another 10 minutes when fellow Honda rider Tom Luthi edged him out, and then Marc Marquez took over.

Marquez first set two 1m35s efforts and then another two in the 1m33s range, the second of those giving him a lead of 1.9s with 12 minutes on the clock.

But with Marquez not improving, others caught up before Andrea Dovizioso and Zarco moved ahead.

Zarco, only 11th overall after FP2, was battling for a Q2 spot, but his 1m33.010s was two tenths off Franco Morbidelli's, 10th on Friday, time from Friday.

The Tech 3 Yamaha rider did not improve next time around but Miller, who followed him on track, did - moving into the overall top 10 with the 1m32.871s he set just a few seconds before the chequered flag fell.

However, Zarco fought back as he had time for another lap to eventually take first in FP3 with a 1m32.788s, which translated to ninth in the overall classification.

Miller was second, 0.073s adrift, with Dovizioso and Marquez completing the top four.

Franco Morbidelli continued his impressive weekend with a seventh, but he, along with Andrea Iannone, was pushed out of the overall top 10 by Zarco and Miller.

Qualifying later on Saturday will thus mark the first time Andrea Iannone has had to fight through the opening segment since this race last year.

Pedrosa ended up eighth with Hafizh Syahrin recovering from a difficult Friday to ninth.

It was a quiet session for the factory Yamahas as Maverick Vinales and Valentino Rossi were 10th and 20th respectively, but both are into Q2.

The Ducati GP18s of Danilo Petrucci, 15th, and Jorge Lorenzo, who ended FP3 without a laptime, also stayed in the overall top 10.

Tom Luthi and Bradley Smith both crashed in the dying stages at Turn 8 and 14 respectively.

Misano MotoGP qualifying - as it happened