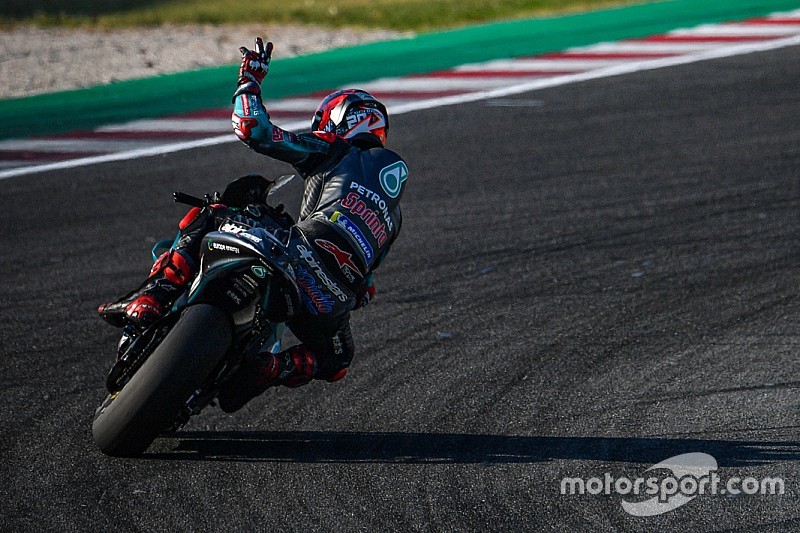 Fabio Quartararo was once again fastest at the Misano MotoGP test, after topping Friday’s running by 0.476s over Ducati’s Danilo Petrucci.

The rookie edged out Petronas SRT teammate Franco Morbidelli in Thursday’s afternoon session at the San Marino Grand Prix venue by just 0.023s, having been passed fit to ride just days after his heavy crash on the opening lap of the British GP.

The Friday morning session was led by Pramac Ducati’s Jack Miller, who stole top spot away from his rookie teammate Francesco Bagnaia with a 1m32.405s – some half a second quicker than Quartararo’s time from Thursday.

Miller would sit out the afternoon session, while championship leader Marc Marquez set the pace in the early stages with a 1m33.556s as he continued to evaluate the carbon fibre-wrapped chassis on his Honda.

Leading by close to half a second at one stage, Marquez’s advantage was cut down by Quartararo with just under two hours remaining to 0.183s, with Morbidelli moving into second not long after.

Miller’s time from the first session stood as the overall best of the test until the final 30 minutes, when Quartararo produced a 1m32.402s - having just taken over top spot with a 1m32.516s.

He would improve this to a 1m31.978s in the closing stages, which he would better to a 1m31.639s to get to within a tenth of the of the outright lap record.

Morbidelli held onto second right until the dying seconds, when Petrucci leaped up to second with a final effort of 1m32.115s.

Valentino Rossi and Yamaha teammate Maverick Vinales were fourth and sixth respectively, as they continued to test the 2020 prototype version of the Yamaha, as well as a new carbon fibre swingarm – which Rossi admitted following last Sunday’s Silverstone race had been something he had long been requesting.

Bagnaia ended up seventh, while Miller was fifth by virtue of his first session time. LCR’s Takaaki Nakagami was top Honda in eighth on the combined times ahead of Aprilia’s Aleix Espargaro and Marquez.

Pol Espargaro, on the only other RC16 present on Friday after Johann Zarco elected to sit out the final day of running, crashed in the morning.

He escaped uninjured and ended up 18th overall, having tested the ’20 prototype KTM Pedrosa has been helping to develop this year.

Honda’s Jorge Lorenzo and Tech3’s Miguel Oliveira both missed Friday’s running as they opted instead to focus on recovering from injuries ahead of the Misano race in two weeks’ time.