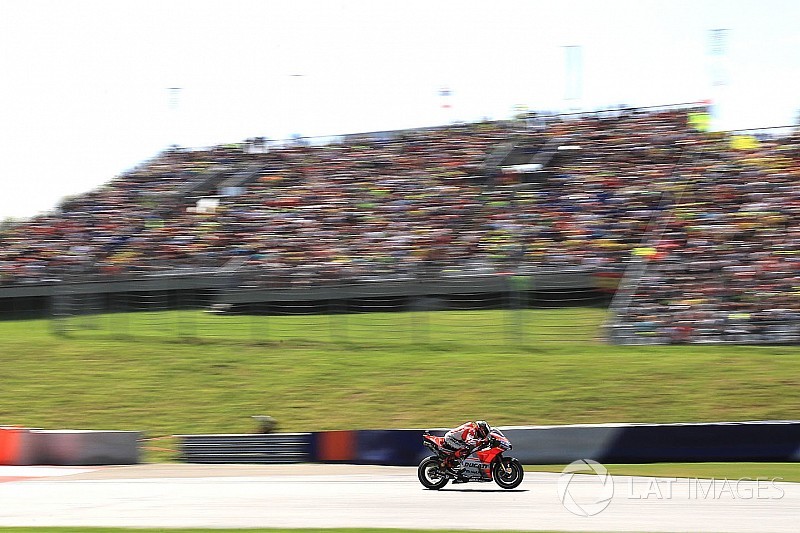 Jorge Lorenzo said he lost the chance to score pole position for MotoGP's Austrian Grand Prix because of a "misunderstanding" that led to him not using a new front tyre on his final run.

Lorenzo battled for pole with teammate Andrea Dovizioso and eventual pole-sitter Marc Marquez, but ultimately ended up third, 0.135s off the pace.

Lorenzo had three runs during qualifying, one more than Marquez and Dovizioso, each time putting on a new soft rear tyre.

However, he kept the same front tyre throughout the session, even though he had the chance to use fresh rubber on his final run.

"Probably at the end we have enough time to put a new soft tyre that I always prefer to go a little bit faster," he said.

"There was a little bit of a misunderstanding in the garage and we didn't put it. So this probably cost us a little bit the chance to fight for pole.

"We all knew that that the three of us would be close to fight for the pole position, and was like that. We are [within] just one tenth."

Lorenzo admitted that he was missing confidence in sector three at the end of Friday, and the issue persisted during Saturday.

He felt the problem is less to do with the bike and more to his riding style.

"Well, in FP4 I improved a little bit in that sector, but unfortunately there's still missing something.

"So I don't think it's about setting or the bike, I think it's more about my riding style.

"I'm going to study a little bit with the video and see if if I can do something for tomorrow.

"Anyway, in the warm-up I think we're going to try something that can improve a little bit the braking, so hopefully we can find some more tenths."

Marquez, who beat Dovizioso to pole by 0.002s, said sector three - which features two sweeping left-handers - is where he was making up ground on the Ducati rider in their battle last year.

"Tomorrow will improve Jorge [in sector three] so will be more equal everything."

Analysis: Can Marquez steal a win in "Ducati's land"?