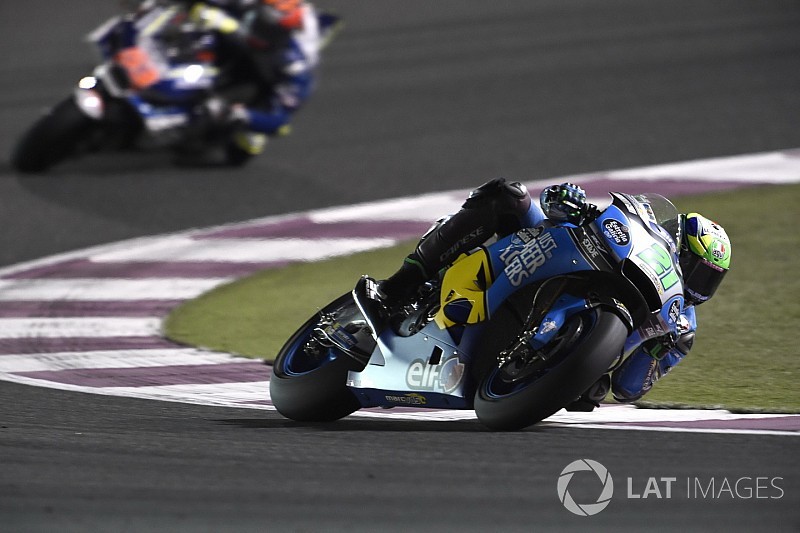 Marc VDS Honda rider Franco Morbidelli says he was "positively surprised" with his speed after he finished 12th on his MotoGP debut in Qatar.

The reigning Moto2 champion was top rookie in qualifying in 14th place, and the Italian spent the entire Qatar Grand Prix circulating in 12th and 13th places.

Morbidelli eventually finished in the former position and collected four points on his debut, putting him two places ahead of next-best rookie, Tech 3's Hafizh Syahrin.

The Valentino Rossi protege said he had "much better" pace than he expected, after opting for a cautious approach in the early laps.

"We did a good result at the end," said Morbidelli. "I started quite ok, I decided to stay a bit calm in the beginning, just to understand how the first laps in MotoGP work.

"Then I got a rhythm and started to push, and actually the pace was much better than what we were expecting. So I was positively surprised."

In the early stages of the race, Morbidelli was fighting against Yamaha and Ducati factory riders Maverick Vinales and Jorge Lorenzo, and said he managed to "learn from them a little bit".

"I was able to check out a bit the good guys, learn from them a little bit. From Lorenzo, from Vinales, from the good guys," he said.

"[During] the first laps you have to be really aggressive, even more than Moto2. I took it a little bit easier on the first laps because I wanted to understand good how the tyres work in the beginning.

"I will try to be more aggressive in the first laps in the next races."

Morbidelli's fellow rookie and Marc VDS teammate Tom Luthi was 16th, missing out on a points-scoring position by nine tenths of a second.

Luthi rued brake problems during the race that cost him a chance to finish in the top 15.

"The temperature of the carbon brakes was far too high, there was some problem," said Luthi.

"I could feel my arm because I had to pull the brake lever so hard. The bike would just not slow down. I got really close to other riders. That was a problem.

"I couldn't overtake even if the opponent was much slower. [Bradley] Smith was slowing down [during the race], but I could not overtake him immediately.

"I was behind him, he pulled away during acceleration and I could not slow down fast enough on the brakes."

Espargaro: Aprilia has to improve bike to keep me