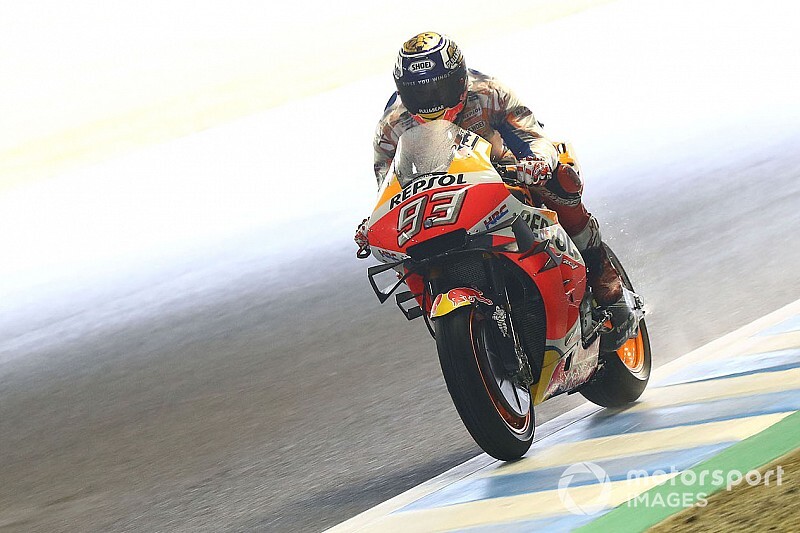 In the closing stages of Q2 on a damp-but-drying track, Honda rider Marquez posted a best time of 1m45.763s, beating Petronas Yamaha rider Franco Morbidelli by 0.132 seconds. It marks his first premier-class pole at the Twin Ring Motegi circuit.

Marquez had controlled the early stages of the session, at one stage pulling 1.1s clear of the field, and his 1m45.923s was comfortably the quickest time in the first runs.

That stood as the benchmark until Marquez found another tenth and a half in the final sector on his best lap, with Morbidelli doing enough to take his first front-row start since the Catalan Grand Prix in June.

Fabio Quartararo suffered a rare defeat to his teammate on his way to the final front row spot, 0.181s down on Marquez and half a tenth slower than Morbidelli.

Maverick Vinales made it three Yamaha riders in the top four on the best of the works bikes, ahead of Cal Crutchlow on the LCR Honda.

Jack Miller, who was first to change from wet tyres to slicks in the preceding FP4 session, was the top Ducati runner, the Pramac rider narrowly beating the works bikes of Andrea Dovizioso and Danilo Petrucci.

Aleix Espargaro (Aprilia), the second factory Yamaha of Valentino Rossi and the Suzukis of Alex Rins and Joan Mir completed the Q2 order.

Q1: Nakagami misses out on progression

Home hero Takaaki Nakagami - making his final outing of the season at Motegi - narrowly missed out on advancing out of Q1 aboard the second LCR Honda.

The Japanese rider led the way after the opening runs ahead of teammate Crutchlow, but his final effort of 1m46.998s was beaten by both Crutchlow and then Rins.

It meant Nakagami missed out on a Q2 spot by just 0.034s, and he lines up 13th ahead of Francesco Bagnaia (Pramac Ducati) and top KTM man Pol Espargaro.

Mika Kallio will start 17th on the second works KTM, behind the Tech 3 bike of Miguel Oliveira.

Jorge Lorenzo could muster only the ninth-fastest time in Q1 and thus will start Honda's home race 19th on the grid, while Suzuki wildcard Sylvain Guintoli will start 21st.

Guintoli was excluded from FP1 and FP2 for using a 2020-spec engine, falling foul of the rules, but reverted to the 2019 unit for Saturday's running.

UPDATE: Avintia Ducati rider Tito Rabat, who didn't set a lap in Q1, will have to start from the pitlane with a five-second delay for violating an engine duration regulation.

Rossi "not good enough" in braking at Motegi