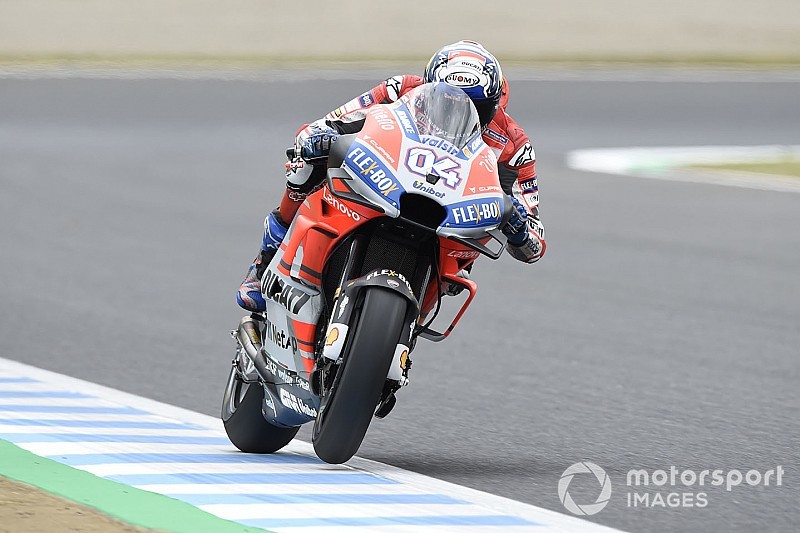 After FP2 was rendered unrepresentative by rain, Saturday morning's session took place in sunny weather, although it took until the final couple of minutes for Friday's best times to be beaten.

With 10 minutes left on the clock, the top six overall remained unchanged from Friday, with only a handful of riders improving prior to the all-important final runs.

But Dovizioso was able to go 0.027s quicker than Crutchlow on his final run to retake the top spot with a 1m45.107s.

A late improvement for the Tech 3 Yamaha of Zarco shuffled Marquez down to fourth place, the Frenchman ending up just three thousandths shy of Crutchlow, creating an identical top four to FP1.

Valentino Rossi had dropped as low as 11th in the closing stages, outside the automatic Q2 cut-off, but the factory Yamaha rider booked his place in the pole shootout by going fifth fastest on his final lap, 0.315s off the pace.

Dani Pedrosa (Honda) was next up, followed by Maverick Vinales (Yamaha) and the lead Suzuki of Alex Rins.

Taking the final automatic Q2 places were Andrea Iannone (Suzuki) and Jack Miller, whose Pramac Ducati teammate Danilo Petrucci ruled himself out with a late crash at Turn 12.

Alvaro Bautista (Nieto Ducati) also found himself squeezed out of the top 10, 0.054s behind Miller.

Sylvain Guintoli, riding a 2019-spec machine for Suzuki this weekend, was 25th and last, but ahead of Avintia Ducati of Jordi Torres - who had an early fall at Turn 7 - on the overall timesheets.