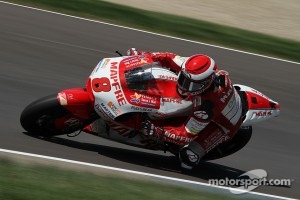 Only fourteen riders took the start in the MotoGP Australian Grand Prix. The absence of Cudlin, Lorenzo and Spies from the starting grid made for a sparse startline image at Phillip Island, but there was still a race to be contested. With title rival Lorenzo out of action, Casey Stoner had a free run at victory at his home race. The Australian rounded off a dominant weekend with a runaway victory, in the process becoming MotoGP World Champion for 2011. The rain that had threatened to fall on track only did so in light quantities late on, and few riders chose to come in to change bikes after the white flag was shown.

Damian Cudlin, standing in for Héctor Barberá this weekend as the Spaniard recovers from injury, befell a similar fate to the regular MAPFRE Aspar rider at the Australian GP. The substitute rider didn’t make the start for his home race, as the heavy crash of Saturday afternoon took its toll. A huge abrasion to his left side and a significant contusion to his hip meant that Cudlin had to sit out the event, having made a valiant attempt to participate in the warm-up to test his condition. He only managed a single lap before realising that racing would not be possible, and was taken immediately to the Clinica Mobile for an X-ray. Fortunately no fractures were suffered in his big crash, although Cudlin will head to hospital in Melbourne tomorrow in order to undergo further tests.

The next MotoGP race takes place this coming weekend, at Sepang in Malaysia.