MotoGP returned to action today for the first time since the tragic death of Marco Simoncelli and the poor conditions on day one matched the feelings of the riders as they went out on track to honour ‘Super Sic’ in the best way they could.

Right from the off this morning the teams and riders were faced with a rain-soaked Ricardo Tormo Circuit in Valencia making the tight and twisty track all the more difficult to navigate. For most of the two sessions it was once again the factory teams that saw their riders topping the timing sheets but there were also a number of surprises thrown up due to the wet weather. 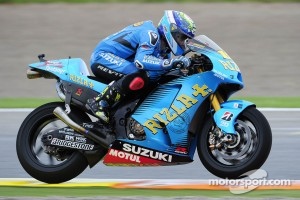 This morning’s FP1 session saw the familiar names of newly-crowned World Champion Casey Stoner (Repsol Honda) on top of the timing sheets while teammate Dani Pedrosa followed in a close second with Ducati Marlboro’s Valentino Rossi putting in a strong performance to sit in third place at the end of the first 45-minute session. Rizla Suzuki rider Alvaro Bautista ended FP2 at the top of the pile however it was in in FP1 where the Spaniard set his fastest time of 1m 46.922s which was good enough for 11th in the tricky conditions.

The morning session would also be where today’s fastest times were set with the track improving throughout the 45 minutes, a stark contrast to this afternoon’s FP2 where conditions worsened. Stoner’s morning time of 1m 45.513s was untouchable by the rest of the field and none of the riders would improve with a better time in the afternoon because of the weather. 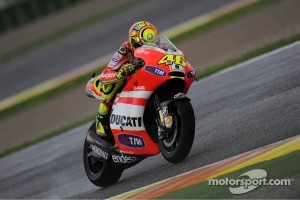 Pramac Racing rider Randy de Puniet is still looking for a job next year and put in a strong performance today where he set a best time of 1m 46.371s in FP1 while in the afternoon he finished third setting a time nearly two seconds slower. De Puniet’s teammate Loris Capirossi is riding with no. 58 today as a tribute to fellow Italian Simoncelli and the weekend is even more poignant for ‘Capirex’ as this is his final race in MotoGP after announcing earlier in the year that he was to retire at the end of this season. Capirossi set a best time of 1m 46.108s in FP1 but was also put on the back foot with the conditions in the afternoon.

Yamaha Factory Racing’s Ben Spies returns to action this weekend after sitting out for the Australian and Malaysian races. The American set a best time of 1m 46.259s this morning before having another high-speed crash at turn 1 during the afternoon session preventing the rider from returning to the track for the duration. Third of the Repsol Honda riders Andrea Dovizioso set his fastest time this morning (1m 46.402s) and was not able to improve during this afternoon.

Cal Crutchlow (Monster Yamaha Tech 3) and Karel Abraham (Cardion AB Motoracing) both head into this weekends race with both riders battling for the rights to the title of rookie of the year. Crutchlow edged out his rival with a FP1 time of 1m 46.581s to that of Abraham’s 1m 47.079s, however the Czech Republic rider did finish ahead of Crutchlow in the afternoon session.

San Carlo Gresini Honda’s Hiroshi Aoyama set a best time of 1m 47.581s with the Japanese rider donning the #58 on his bike as with all the Gresini team wearing the number on their uniforms in honour of their tragic rider Simoncelli. Substitute riders Josh Hayes deputising for injured Monster Yamaha Tech 3 rider Colin Edwards put in a solid effort and set a best tome of 1m 48.037s while Katsuyuki Nakasuga who is filling in for Yamaha Factory racing’s Jorge Lorenzo managed a time of 1m 48.382s.

Toni Elias (LCR Honda) steps onto the RC212V for the last time this weekend and today managed a best time of 1m 46.393s but was higher up the times in the afternoon session. Hector Barbera (Mapfre Aspar) recorded his best of 1m 46.967s this morning while the afternoon saw the Spaniard lap consistently slower like all the other riders on the wet track conditions.

The MotoGP Paddock will pay tribute to Marco Simoncelli many times this weekend with a large number of teams and riders planning and some already revealing their plans like good friend Rossi who has a special helmet design to unveil in tomorrow’s qualifying session. 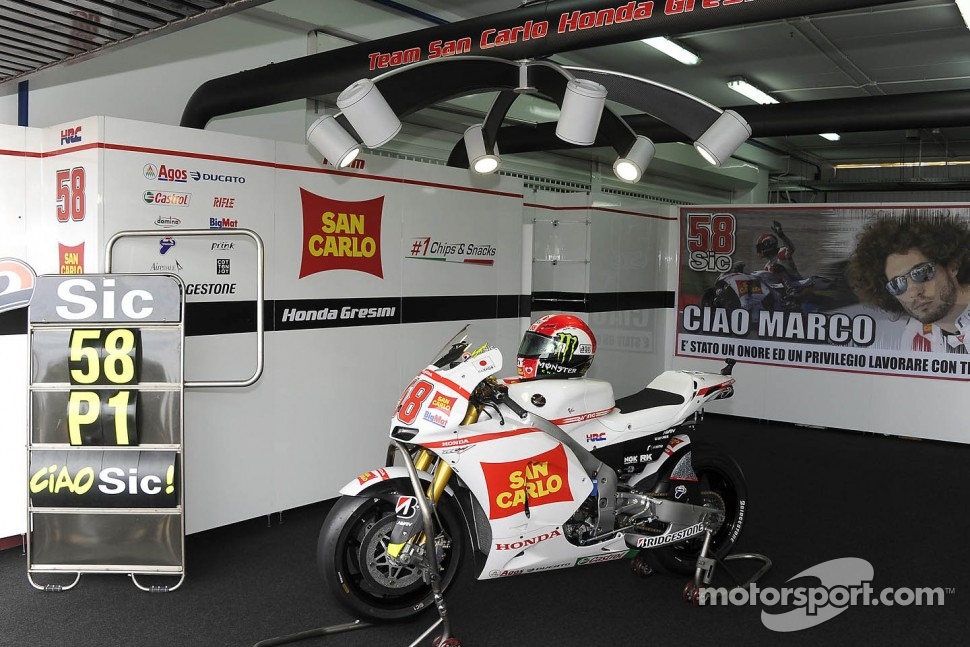 A tribute to Marco Simoncelli in Team Gresini's pit box