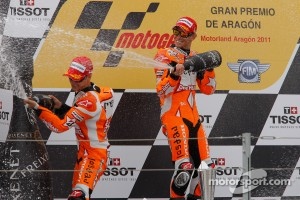 Although it remained dry today and the weather warning issued overnight didn’t materialise, conditions for the race were much cooler and windier. Nevertheless, Stoner set a new lap record on just his fourth lap of the race, indicating strong tyre warm-up performance, and ran consistently in the 1m 49second bracket over the first half of the race.

His pace meant that he finished over eight seconds clear of teammate Dani Pedrosa, whose best effort was also under the previous lap record, and behind him Lorenzo crossed the line third after fighting back from fifth.

Throughout the race, tyre management proved very important as wear rate on the surface was relatively high. Off-line the tarmac was dirty and this always leads to increased tyre wear, especially for those in battles further down the field who cannot always stick to the ideal and clean line.

Every rider opted for the harder option rear slicks, and most also used the harder option fronts with the exception of Alvaro Bautista, Hiroshi Aoyama, Colin Edwards and Loris Capirossi who used a medium compound front. Bautista in particular used his to good effect, battling hard with Hector Barbera and Nicky Hayden throughout to finish sixth.

“Congratulations to Casey and the Repsol Honda team for marking their 100th GP victory in style this weekend, extending their lead of the Riders’ Championship with four rounds remaining. Next we head to Motegi for the Japanese Grand Prix and what is the home race of many manufacturers in the paddock, of course including Bridgestone, so we look forward to being able to show our solidarity and support for this nation and hope for another thrilling race after last year’s encounter there.”

“Conditions for the race today were completely different to the rest of the weekend as the track was much cooler and there was a strong wind blowing down the main straight. This meant that the situation for the tyres and bike setups was very different. Even though our tyre compound options were the same this time as at Aragon last year, because the track conditions were different this year so was tyre behaviour. It is a prime illustration of the balance between warm-up performance and durability – warm-up performance was clearly very good today in the cool conditions with the top ten fastest riders all setting their best times within the first six laps, and Casey’s lap record coming on lap four. Conversely, it was also clear that tyre wear was a key factor for some riders towards the end of the race, but this is the trade-off of achieving better warm-up performance that the riders have been asking for this season.”

“It was a good weekend all round really. We missed an afternoon of running on Friday so we thought this would affect us today, but what we found were completely different conditions with a lot of wind for the race. We had to set the bike up totally differently, and I think the colder conditions helped us with tyre wear. We knew the tyres warmed up fairly quickly and well so after the first few corners we wanted to get moving as we knew the bike was working well here. I want to thank the team because every time I head to the track this year, we have a good package and good rhythm.”