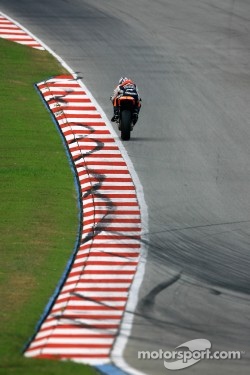 The Repsol Honda machines continued to dominate at Sepang today, and it was Spaniard Dani Pedrosa came out on top after a scrap in the closing minutes to secure his second pole position start of the season.

Finishing just 0.029seconds ahead of Casey Stoner, the gaps throughout the field were much closer today. Andrea Dovizioso was third fastest, marking the first Repsol Honda front row of the season, 0.2seconds back, and the top nine were within one second around the 5.5km circuit.

The track started dirtier this morning than it was yesterday because of extremely heavy overnight rain, and this was compounded when oil was dropped onto the circuit at midday. Pedrosa’s fastest lap was slightly slower this afternoon than his best yesterday, although overall the rest of the field found more speed and the gap between the top nine was 1.1seconds closer than yesterday.

As expected, for their fastest laps most riders favoured the harder option front slick for its braking stability, so critical here, and the softer option rear for its added grip. Based on durability data from the last two days of running, the softer rear seems a feasible option for tomorrow’s race which starts at 1600hrs local time.

Hirohide Hamashima – Assistant to Director, Motorsport Tyre Development Division
“With such a close gap at the front, and the top three all from Repsol Honda, I think we could see a very interesting race tomorrow! The circuit seems a little bumpier this year, but still Dani’s pole time is faster than last year and judging by today’s pace it’s still looking good for a new lap record tomorrow. The qualifying pace was set on the harder front and softer rear, and although I believe the softer rear will be good for race distance, I expect many to opt for the harder rear if the conditions are the same as it offers more durability - something that will be very important over 20 laps tomorrow. Yesterday a few riders covered more than race distance on a softer rear and wear rate and consistency were acceptable, but tyre choice could all be changed by the weather of course. Every evening we have had heavy rain at the circuit and with the race starting at 1600hrs there is every chance of what could be only the third wet race of the season.”