Karel Abraham will start from the fifth row on the grid 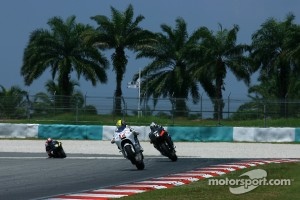 Following a technical problem at the beginning of the qualifying session, Cardion AB Motoracing rider Karel Abraham claimed thirteenth position, just 0,361 seconds away from claiming a starting position of the fourth row on the grid for the penultimate race of his premiere season in the MotoGP class.

„We have changed the set-up that we used in the first and second practice session, but the lap times weren’t as good as we expected. We decided to return to the original set-up, but then we started to have problems with the clutch.“

This mechanical problem caused that Karel Abraham had to swap Ducati Desmosedici GP11 for the second bike. „Although the engine in this bike was more worn, I managed to set a decent lap time and eventually finished in thirteenth position.“

His best time of 2.03,438 was 1,976 seconds away from the fastest rider Dani Pedrosa, who took pole position by just 0,029 seconds from newly crowned world champion Casey Stoner.

„I’m satisfied with this result despite the fact that I would like to start from the fourth row on the grid,“ added Karel Abraham, referring to the last moments of the qualifying session when Loris Capirossi beat his best lap time by 0,361 seconds and eventually finished right in front of the twenty one years old rider.