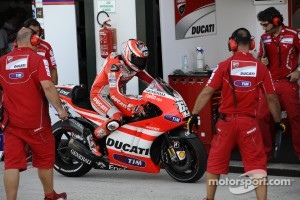 The MotoGP division’s second free-practice session of the Aragon Grand Prix was cancelled due to a failure that caused an electricity blackout at the circuit. After a series of delays, the decision was made to call off the session and extend Saturday morning’s session, which for the MotoGP riders will take place from 9:35 a.m. to 10:50 a.m.

Valentino Rossi and the Ducati Team will have to try to take advantage of the only session remaining before qualifying to prepare the new part that the Italian is using on his GP11.1 beginning with this race.

Nicky Hayden would also have preferred a normal schedule to continue working with the setup in the promising direction that he and his team found this morning, but he’s nonetheless optimistic that he can do so tomorrow.

“We had a little problem at the start of this morning’s session, and I had to come directly back to the garage and lost a bit of time. I started well behind the others, but actually, compared to the last few races, it wasn’t bad once we got going. I think I was the only guy who used the same rear tyre the whole session, and I was able to click off three 51s there at the end. I was looking forward to riding this afternoon, but unfortunately it was cancelled. I hope they get it sorted out overnight, as it wasn’t good for anybody, but there’s no need to dwell on it. Hopefully we can keep it rolling tomorrow, because it’s a nice track. It’s definitely a little bit bumpier than last year, and not really grippy, but I like the layout.”

“I don’t think it’s ever happened before that we couldn’t do a session because the electricity was out! Joking aside, it’s really a shame. For us it was important to test normally instead of just having a long session tomorrow, because you still lose a quarter of an hour in total, and the type of work that you can do is different, more limited. Anyway, we’ll continue with the bike with the updated front frame because the feeling is the same as when I tried it the first time, so it’s worthwhile to continue down this path. We don’t know this track as well as Mugello, and that means we have extra setup work to do, although it’s nothing too major. We must also find more rear grip because it was sliding a lot today.”