Second And Third Row For Simoncelli And Aoyama At Sepang 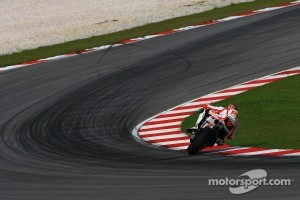 Fifth and seventh place for Marco Simoncelli and Hiroshi Aoyama in qualifying this afternoon means that they will start from the second and third row of the grid respectively in tomorrow's Malaysian Grand Prix. The session was a tale of two halves for “Super Sic” who looked strong in race trim for the opening half hour but struggled somewhat on his two outings in search of a fast time. A small technical problem meant that Marco had to qualify on his second bike, possibly costing him a place on the front row, but he is happy and confident for the race. Aoyama was also a little disappointed after showing good pace this morning and missing out on the second row by just 0.082 seconds.

Marco Simoncelli (5th 2’ 02” 105) “I was satisfied with our pace in the first half of the session when we were working on our race setting but not so much with the 'time attack' because just when we switched tyres I had a problem with a sensor and had to switch to my second bike, which had a different setting that I wasn't as comfortable with. I was struggling a bit and instead of staying out there I decided to come back in and try to make a small change but it didn't work out. Anyway, I am looking forward to tomorrow and feeling confident I can fight with the three guys on the front row. We just need to decide which tyre to use for the race.“

Hiroshi Aoyama (7th 2’ 02” 254) ”I am satisfied with today even though we missed out on the second row by hundredths of a second. I have got a good feeling with the bike and I think we will run the soft tyres tomorrow. I like this track and if we can refine the setting a little in the warm-up tomorrow I am sure we can be fighting near the front in the Malaysian Grand Prix.”

Fausto Gresini “It has been a positive day even though Marco didn't get a flying lap in that would have put him on the front row. In race trim he is up there with the best and Marco has improved a lot from yesterday so we are confident. I am happy for Aoyama who has shown once again how strong he is at this track. It is a shame we don't have both riders on the second row but I think they can be up there fighting in the race.”