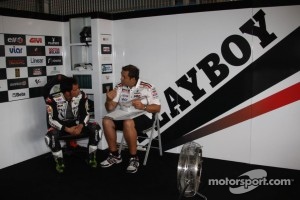 Sepang, 21st October: last over sea round for the 2011 MotoGP “circus” which hit Sepang circuit in Malaysia this weekend only one week after the Australian GP where Stoner clinched the premier class world title. After the cold and the rain of the Island round, the 800cc riders have enjoyed hot and humid weather of Malaysian track with Pedrosa on the top of the time sheet in today’s free day of practices (2’01.250).

The Sepang Circuit was where LCR racer Toni Elias was crowned the inaugural Moto2 champion in 2010. Having finished eighth at Phillip Island, tying a season best, Elias is hopeful of carrying that form to Sepang but today’s lower grip conditions did not help the Spaniard who qualified only 16th (2’04.071).

Elias – 16th: “We came here in February for the winter test and, at that time, we had some issues in the braking and the bike was unstable and all the weight was going into the front and also in the mid-corner I did not have enough weight transfer to load the rear tyres. Few months later we are back here and the bike set up is totally different but we are still struggling even for the grip level which is lower compared to the winter test. In today’s afternoon session we have compared different tyres and I prefer the softer option both rear and front. We still have a lot of things to adjust to improve the bike stability especially in the fast corners”.

Miller stuck in Australia with COVID-19