Emotional Final Round At Valencia For MotoGP Riders And Teams 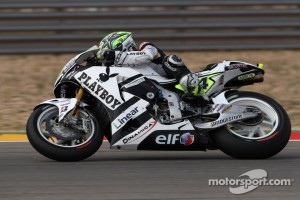 Valencia, 6 November: the ultimate round of 2011 season at Ricardo Tormo circuit was full of emotions for riders, teams and MotoGP fans. Nico Terol clinched the 125cc World Title and the German Stefan Bradl was finally confirmed as the 2011 Moto2 World Champion whilst this morning riders from all three categories were invited to depart from the Pit Lane as a group, and completed a lap of the track in honour of Simoncelli (the procession was led by former World Champion Kevin Schwantz on Simoncelli’s RC212V bike). The 18th round was also the ultimate race for Italian racer Loris Capirossi who concluded the final race of his 22-year career with a ninth place.

LCR Honda MotoGP Team racer Toni Elias started from the 13th spot on the gird for his last race aboard the RCV212V finishing in 10th place. Stoner claimed his tenth victory of the 800cc era ahead of Spies and Dovizioso.

Elias – 10th : “Well… First it was very tough to line up without Marco today and we will always remember him. I took an incredible start from the 13th spot and I could have gone for the fifth place but Nicky got into my way and he was involved in the crash in the first corner. From the beginning to the middle of the race we had a good pace just 1.5s slower than Casey in the front but later on, when it started to rain, I did feel safe as I started to lose rear grip in corner entry so my lap time dropped down and I managed to finish tenth. This season was very tough for me but in the mean time I learnt a lot: now I hope to start with a new challenge with more luck and the same I also wish to Lucio and the LCR Team”.

Cecchinello – LCR Team Manager: “First this season will be remembered for the tragic loss of Marco who will remain in our hearts forever because he was a pure talent and a charismatic guy. This season was tougher than what we expected but we learnt a lot from the difficulties and we will keep on working at 100% as always. I must thank Toni because he always tried hard to find a solution and the Team too. I wish him the best for his future career because he is a tough rider and a guy with a huge heart, a contagious smile and full of human worth”.