The Yamaha rider crashed at the exit of Turn 12 on his final lap of the 20-minute session, high-siding off the bike and coming to rest on the edge of the circuit.

Lorenzo was declared unfit to race after sustaining an injury to the fourth finger of the left hand and he will travel to Melbourne to undergo plastic surgery to repair the damage. 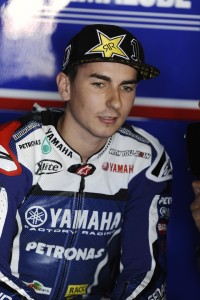 Lorenzo trails world championship leader Casey Stoner by 40 points with three races remaining, meaning the Australian only needs to finish in the top six in the 27-lap race to secure his second world title. Stoner has topped every on-track session this weekend at the Island, and has won in Australia for the past four years.

Lorenzo’s team mate Spies received a hit to the head yesterday during the qualifying session after a high speed crash. After attempting to ride some laps in this morning’s warm up, the rider reached an agreement with team members that with reduced concentration attempting the race would be considered too dangerous for himself and other competitors.