For the past three MotoGP weekends the spotlight has been on Casey Stoner as the Australian earned a hat-trick of races to lengthen his championship lead. This weekend in Italy was no different, as the Repsol Honda rider seemed once again destined to keep his rivals behind him. Yet, even Stoner admitted today was going to be a difficult race. However, what the title leader probably didn’t expect was Jorge Lorenzo making a brilliant start and snatching the lead in the first turn on the Autodromo di Misano circuit, a lead which the Yamaha rider kept until the checkered flag to win the Gran Premio Aperol di San Marino e della Riviera di Rimini.

“The team have done a great job and all the weekend we have been so quick," said Lorenzo. "I had a great bike and a great feeling in the corners. I really wanted to be first in the first lap to try and open a gap but I was really worried about the situation of the weather so I prayed for it to not rain. I expected a hard fight with Casey but fortunately for me he lost a bit of pace mid-race and I could win again. This is a big result for me and for Yamaha and it is great to be back and win again. This is very important.”

This is a big result for me and for Yamaha and it is great to be back and win again. This is very important.

As Lorenzo went off to control the race Stoner and teammate Dani Pedrosa settled into a battle for second that would last the entire 28 laps of today’s race. Unable to make pace against the Yamaha in front, Stoner was forced to worry more about the rider chasing him and by lap 22 the pressure was too much. Pedrosa was able to slip around his fellow Honda rider and easily kept the position for the remaining six laps.

"From the first lap, I realised I couldn't keep up with Jorge and Casey," admitted Pedrosa, "at the beginning the bike was closing the front and then it was sliding in the rear. The second part of the race was good, Jorge had a perfect race today, but I was able improve my times lap by lap and catch Casey. I overtook him and had another second place in two weeks, which is not so bad."

A fatigued Stoner would settle for the final podium spot, meaning Lorenzo has now closed the gap for the championship to 35 points. With five events left in the season this title fight is now heating up between these two rivals.

"At the beginning of the race I was cautious as there were a few spots of rain," explained Stoner, "once this cleared up I was pretty comfortable behind Jorge, I didn't feel the need to push and then tiredness suddenly hit me. It was hard to find the braking points and change direction on the bike, there was nothing wrong with the tyres, nothing wrong with the bike, the team did a great job and gave me a fantastic package, I'm just worn out. I had to put in a lot more effort into Laguna and Brno, riding a lot harder than I normally would. This together with the neck injury from Assen has finally caught up with me. For the second half of the race I was just too tired, simple as that, I'm very grateful to have finished on the podium. All credit to Jorge, he had a fantastic race, hopefully by Aragon I'll be fully fit and recovered." 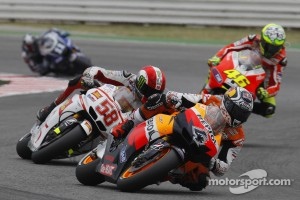 After a disappointing start Marco Simocelli was able to bounce back into forth on the final lap after a fight with his fellow Italian, Andrea Dovizioso. The Gresini Honda rider put in another solid ride to be the highest placed non-factory rider of the weekend. Ben Spies was also engaged in the battle over fourth but had the door closed on him by both riders, forcing the American to take sixth, just one weekend after his stellar podium at Indy.

Valentino Rossi was on damage control in front of his passionate home town fans as the Italian tried his best to keep in touch with the front runners. In the first lap it seemed Rossi had the pace as he came up the order while his rivals suffered from poor starts. Yet as the race wore on Rossi found himself slipping backwards as the top six went on in their own battles. Seventh was the best Rossi and the Ducati team could do at Misano.

“I’m pretty happy because we didn’t expect to do this well," said Rossi. "I didn’t think I’d be able to stay with the second group, which is our goal at the moment, and instead we managed it for half the race. We still weren’t able to attack like we’d like to, but anyway, we were right there. I started really well from the fourth row, and I was a little crazy through the first three corners because I had to push even though there were some raindrops. It was nice after that. I stayed with ‘Sic’ and ‘Dovi’ for a little while and also battled with Spies, and we maintained a good pace."

Alvaro Bautista and Hector Barbera both put in strong rides to finish eighth and ninth respectively. As the sole Suzuki rider in the field Bautista was hoping for a stronger result after having a good qualifying and warmup but he was not able to gain any positions in the race. Same for Barbera, the Aspar Ducati finished where he qualified, but is content with another top ten finish.

Cal Crutchlow rounded out the top ten for the Tech 3 Yamaha team, with Hiroshi Aoyama and Karl Abraham close in tow. Tech 3 teammate Colin Edwards had a disappointing race and finished 13th followed by Pramac Racing's Randy de Puniet in 14th and LCR Honda's Toni Elias, who was scored as the last of the runners in 15th. 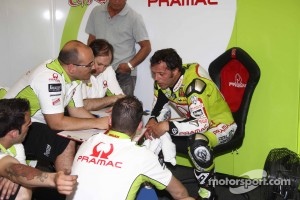 There were two retirements today, Nicky Hayden crashed his Ducati two laps into the race while Loris Capirossi pitted eight laps in with what was described as chain problems. The Italian rider had just announced his plans to end his career at the conclusion of this season, and was hoping for a stronger result in front of his fellow countrymen.

As for Hayden, the crash was as surprising to him as it was to the spectators, "It was raining a little bit at first, which is normally good for our bike. I got a decent start, felt good, and was going to take a few chances to try to get up as far as I could. Then I lost the front on the exit of Turn 15 and—bam!—I was down. We looked at the data, and I’m not really sure why I crashed. We were tip-toeing because of the rain, so maybe the left side of the tyre wasn’t quite up to temperature, although it was still rider error. This track has been the worst one on the calendar for me. I certainly could use some good luck, and maybe we’ll get it at Aragon.”

Hayden and the rest of the riders will be looking for more in two weeks as the MotoGP circus moves on to Spain for the Aragon GP. With Lorenzo on home soil Stoner will have to make sure he is tip-top shape if he wants to challenge his rival.

After Aragon it will then be off to Motegi for the rescheduled GP of Japan. There has been some speculation on how many riders were planning to attend the event, as both Stoner and Lorenzo cited concerns of standing radiation levels around the Twin Rings circuit. However, as Lorenzo closes the title fight to Stoner, it may force their hand in having to attend the event, lest either one risk missing the opportunity to score valuable points in the final part of the season.

The results in Aragon may have a direct impact of either of these two will head to the East. The final answer to this interesting championship twist will be known in two weeks’ time, stay tuned to Motorsport.com as the drama unfolds.