MotoGP main protagonists ready to do battle in Assen

The ‘Cathedral’ beckons as MotoGP touches down in the Netherlands

The MotoGP championship touches down in the Netherlands this week for the Iveco Daily TT at the iconic Assen circuit, a track that is held in such reverence it has earned the title of ‘The Cathedral’. The riders are readying themselves to tackle the 4.542 km circuit with the first free practice sessions beginning tomorrow with the race remaining in its traditional Saturday slot.

The weather is always unpredictable there so we will, as always, work hard from the first session to find a good setup.

With championship leader Marc Marquez utterly dominating this year so far, the Repsol Honda rider will be aiming to make it eight wins from eight starts but he expected to face stiff competition this weekend with his teammate Dani Pedrosa on an upward curve and nearest factory rivals, Valentino Rossi and Jorge Lorenzo are both in buoyant mood for the Movistar Yamaha team following positive testing at Catalunya and Aragon in Spain last week.

The momentum is certainly with Marquez with the championship leaders form this year but out of the main protagonists it is Rossi who is the most successful with eight wins (6 MotoGP, 1 250cc & 1 125cc) with the seven times MotoGP World Champion taking the victory here last year and ending a near three-year barren spell. The victory of Ben Spies in 2011 at the Dutch circuit was the last time any rider other than Rossi, Marquez, Lorenzo, Pedrosa or Casey Stoner won a MotoGP race. 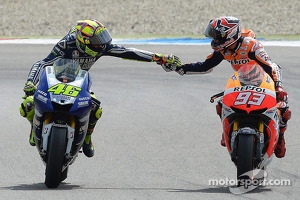 Speaking as the Repsol Honda team touched down at the track, Marquez was upbeat but cautious of a race prediction. He said, “We are still in enjoying a really good momentum but we know it can’t go on forever! I really like Assen and have had some good results in the lower categories, and last year we took second in my first visit there on the MotoGP machine. The weather is always unpredictable there so we will, as always, work hard from the first session to find a good setup.”

The circuit holds many special memories for Rossi with the Italian confident that the Yamaha YZR-M1 will suit the track perfectly. Rossi said, “Assen is a great track and a good track for Yamaha. The weather will be very important here. You never know if it will be hot or cold or dry or wet. Last year's race was unforgettable but honestly this year I feel I am strong almost everywhere so we have to try hard to beat the competition.”

Pedrosa looked to be back to his best last time out in Catalunya and narrowly missed out on giving the Repsol Honda team a one-two finish. “It was good to be back at the front and fighting in Catalunya!” Pedrosa said while adding, “I’m looking forward to going to Assen and hope I’m one step fitter again as last year I didn’t really have a good race, so I hope to improve. The weather is usually tricky so you must make the most of any dry track time. I like the track but it’s important to find a good setting and feeling with the tyres as there are a few very fast corners.” 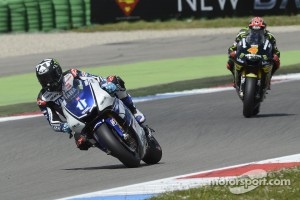 Lorenzo will aim to improve his pace once again this weekend after another finish outside the podium places in Spain two weeks ago. He said, “After a bit of a disappointing weekend in Barcelona where I gave my best even when some circumstances didn’t help us, we travel to Holland with plenty of optimism. In Barcelona we struggled a bit with the acceleration, especially in the last part of the track where we used to be so strong in the past. This year that issue didn’t allow me to fight in front for the victory. Afterwards during two test days we found some solutions to solve that problem and we tested new things to try to cut off the distance with our main rivals.

I look forward to racing in Assen; it’s maybe my favorite circuit. It’s a nice layout defined by some quick corners and a short straight that looks good for us, and especially for the Yamaha. In recent years I couldn’t get so many good results but instead I always could find a good set up and ride in my best way. Last season I finished fifth after a surgery on my collarbone and I suffered a lot but finally I could conclude a very special race. Anyway, looking into the future it is the best opportunity to do my best and try to get my first win. We will see!” Lorenzo added.