Spain’s Dani Pedrosa claimed his second pole position of the year during qualifying for round 17 of this year’s MotoGP Championship, the Shell Advance Malaysian Grand Prix at Sepang. Pedrosa was blindingly fast during the hour-long session and the Honda rider even grabbed pole despite a front-end crash near the beginning of the session.

Pedrosa (2m 1.462s) heads up a front row exclusive to the Repsol Honda team with newly crowned MotoGP World Champion Casey Stoner (2m 1.491s) in second and finishing the session in third was Andrea Dovizioso (2m 1.666s) and the factory Honda riders were the only three to lap inside the 2m 2s mark.

Pedrosa said, "It was a very difficult session, extremely hot, I couldn't breathe inside the helmet. We had a small crash in the front that I didn't expect, but was able to go back and go faster and take my second pole of the season. I thought I would be able to improve a little more at the end and get closer to the time I did yesterday, but I found some traffic on my final run. Anyway, it's good to be on pole and I hope our race pace can be even better.

To have three Repsol Honda riders on the front row is very good, but we cannot forget the other rivals...

“We have to work on the set up and make a good rear tyre choice because our rivals are also very strong. It's going to be very physically demanding for everybody. To have three Repsol Honda riders on the front row is very good, but we cannot forget the other rivals and we must keep focused to finish the weekend in the best way,” he added.

Stoner did his best to add another pole position to his incredible tally of 11 for this year. "I tried to steal pole but it wasn't really our day today. We tried a few different things in set up but we haven't really gone the right direction at all this weekend. In qualifying we tried to find another path to go but we just haven't been able to get grip along with turning, we can find one or the other but at best they are both average so we have some improvement to make for tomorrow. Our race pace isn't too bad, we've looked worse than everyone else because we've been running on the harder tyre all weekend but once we put the soft tyres on the bike worked a little better,” said the double MotoGP World Champion.

Speaking about his third place on the front row Dovizioso said, “I’m really happy with this front row and even more satisfied with my race pace. We have improved a lot, reducing the gap to two tenths after being 1.4 seconds behind in FP2 and 0.8 behind in FP3. We were consistent and fast both with soft and hard tyre, meaning that it’s possible to race with both of them. This afternoon the conditions were really demanding, it was very hot and there was no grip but we were able to be consistently fast so we go into the race very strong.

“With such conditions here it’s impossible to push 100% for 20 laps so it will be very important to make a strategy for the race and to manage the tyres. I really like this track and tomorrow it would be fantastic to repeat a Repsol Honda 1, 2, 3 on the Podium, but… in the reverse order!" Dovizioso added. The next rider to cross the line in 4th place was that of Monster Yamaha Tech 3 rider Colin Edwards who had a strong session on the YZR-M1 to record a best time of 2m 2.100s. Starting alongside Edwards is Italian Marco Simoncelli for the San Carlo Honda Gresini squad (2m 2.105s) and the last place on the second row was claimed by Ducati Marlboro’s Nicky Hayden who set a best time of 2m 2.172s to take 6th.

Hiroshi Aoyama (San Carlo Honda Gresini) starts tomorrow’s race at the front of the third row after claiming 7th place with a best lap of 2m 2.254s. Rizla Suzuki rider Alvaro Bautista finished this afternoon’s qualifying in 8th place with his best time of 2m 2.332s. Bautista starts one place ahead of seven-time MotoGP Champion Valentino Rossi who starts from 9th despite a low-side crash with 15 minutes of the session remaining only to make it back to the pits to set his best time of 2m 2.395s on his second Ducati GP11.1. 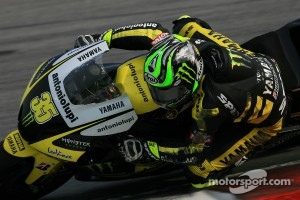 The final position in the top ten went to Cal Crutchlow and the Monster Yamaha Tech 3 team after the British rider set his best time of 2m 2.756s. Randy de Puniet managed to claim 11th place for tomorrow’s race with a time of 2m 2.939s with his Pramac Racing teammate Loris Capirossi in 12th position on a time of 2m 3.077s.

Heading the fifth row is Karel Abraham and the Cardion AB Motoracing team on the Czech rider’s best time of 2m 3.438s. Abraham starts on front of Hector Barbera (Mapfre Aspar) who returns from an injury sustained last time out at Philip Island, Australia (2m 3.619s).

Toni Elias and the LCR Honda team start from 15th place tomorrow on a best time of 2m 3.646s and the Spaniard will be on front of the two Yamaha Factory Racing machines in the hands of Ben Spies in 16th on a time of 2m 3.678s with the American crashing during the session after losing the front end while Katsuyuki Nakasuga who replaces an injured 2010 Champion Jorge Lorenzo, finished in last place with a time of 2m 4.072.

John Hopkins was meant to race a second Rizla Suzuki GSV-R1 as a wildcard this weekend but has had to pull out due to problems with a finger that he broke during this year’s British Superbike championship.

Editor's Note:
Ben Spies has withdrawn from the Malaysian Grand Prix following two crashes at the Sepang Circuit today. The American was still recovering from injuries sustained in Australia and is not in full health for tomorrow's race.

From the Yamaha press release, "Following consultation between Yamaha management and the rider it has been jointly decided that it would be wise to not participate in the race to avoid the risk of further injury. Spies will also miss Monday’s 1000cc test in Sepang.

"This decision will allow Spies the optimum chance of recovery before the important final race of the season and subsequent 1000cc test at Valencia in two weeks time."