Repsol Honda’s Dani Pedrosa leads the way on day one of Free Practice for round 14 of the 2011 MotoGP championship at the Gran Premio de Aragon in Spain on a day that was cut short due to an electrical transformer malfunctioning and causing the second Free Practice session to be cancelled.

Pedrosa, who set a best time of 1m50.281s, leads the way ahead of this year’s two main protagonists of the championship; reigning champion Jorge Lorenzo and his Yamaha Factory Racing YZR-M1 and Pedrosa’s teammate and current championship leader Casey Stoner.

Conditions were good as the riders left the paddock on what was meant to be the first of the two planned free practice sessions and within a short time on track it was the familiar sight of Repsol orange and Yamaha blue that was gracing the top of the timing sheets. 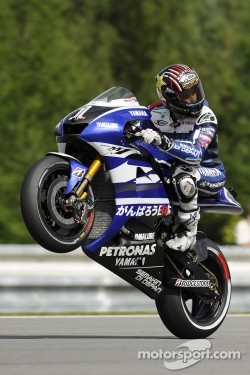 While Lorenzo and Stoner were right at the sharp end for the majority of the session, Pedrosa made some changes in the latter stages and managed to put the fastest time of the day ahead of Lorenzo’s 1m50.730s and Stoner’s 1m50.806s. Following the top three riders was this year’s new sensation, Marco Simoncelli (San Carlo Honda Gresini) ending the day in fourth position (1m50.893s).

Repsol Honda bike no. 3 was next on the list in the hands of Andrea Dovizioso who ended today in fifth on a time of 1m51.091s. Dovizioso leads the way ahead of the first Ducati that is not in the hands of seven-time MotoGP champion Valentino Rossi but that of Pramac Racing’s Randy de Puniet who set a 1m51.376s to finish sixth.

Seventh place on the timing sheets is Ducati Marlboro rider Nicky Hayden (1m51.418s) who is hoping for a much better weekend than last time out in Misano where he crashed out of the race on lap three following a frustrating weekend. Hayden finished ahead of teammate Rossi who has confirmed that he is using a new hybrid chassis that now incorporates an aluminium front section while retaining the original carbon fiber rear end. Despite only setting a time of 1m 51.676s, Rossi said the changes to the GP11.1 made front end feel much better and is in more confident mood ahead of qualifying tomorrow.

Ninth spot on the sheets goes to Colin Edwards (1m51.826s) who continues to push for better times on his Monster Yamaha Tech 3 while San Carlo Honda Gresini rider Hiroshi Aoyama finished tenth on his RC212V with a time of 1m51.859s. Ben Spies uncharacteristically sits in 11th spot with no apparent problems on his bike (1m51.911s).

The Spanish fans have a lot to cheer about this weekend and two riders hoping to put in much better performances in front of their home support will be Mapfre Aspar’s Hector Barbera (1m52.016s) and Rizla Suzuki man Alvaro Bautista (1m52.224s) who finished today’s session in 12th and 13th respectively. Cal Crutchlow (Monster Yamaha Tech 3) sits in a lowly 14th following today’s practice with the British rookie not being able to better his time of 1m52.580s.

Karel Abraham (Cardion AB Motoracing) sits in 15th after day one with a best time of 1m53.158s while Spaniard Toni Elias will not be happy setting his time of 1m53.440s in front of the Partisan crowd giving ‘Tiger Toni’ just 16th on the sheets. The final place on the list comes in that of Loris Capirossi (Pramac Racing) who set a best time of 1m53.842s.