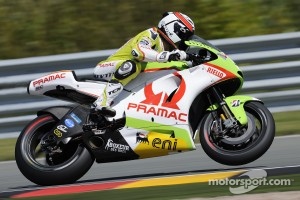 The 14th round of the MotoGP season got started this morning at Aragon, which is also the site of the third Spanish Grand Prix of the world championship. It was a challenging day for Aragon’s technicians, who had to grapple with a blackout in the afternoon that ultimately caused the cancellation of the premier class’ second free-practice session. In the morning session, Randy De Puniet registered the sixth-best time (1:51.376), first among all the Ducatis. Loris Capirossi finished with the 17th-best time (1:53.842) in his first outing at the Aragon circuit. Tomorrow’s free-practice session will be lengthened.

“Randy told me that he has never had as good a feeling with the bike as he had this morning. In the afternoon we would have worked with an eye toward the race, especially with regards to tire wear, so it’s a shame that the blackout prevented us from riding. We also would have had to try the new frame that we received from Ducati. We’ll see if we can do that tomorrow or if we have to save everything until Motegi.”

“It’s a shame that we couldn’t go on track in the afternoon, as the morning session went very well. For a long time I’ve looked for such a good feeling with the bike; it’s strange, considering how differently things went at Misano. I’m satisfied. The bike is working like it should, and I want to repeat my performance tomorrow and Sunday.”

“It’s my first time at this circuit, and I must say that the track is beautiful, but difficult. This morning I tried to ride as much as possible, and unfortunately, this afternoon we were stuck in the garage. I’m optimistic anyway. The time that I did this morning shouldn’t be considered because I was trying to understand the track. I’m sure that I’ll go better tomorrow.”