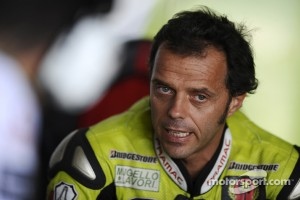 The Aragon Grand Prix finished in the worst way for the Pramac Racing Team, with Loris Capirossi crashing out eight laps from the end, while Randy De Puniet finished his race in twelfth place following an unfortunate start. The Italian rider suffered a right shoulder dislocation, as well as a concussion and a contusion on his elbow. His presence at the next Grand Prix in Japan is therefore in serious doubt; the final decision will be made in the coming days.

“Yet another unfortunate race for Loris. He couldn’t pass Toni Elias on the brakes, so he tried in a corner, but when the HRC rider slowed, perhaps more than he should have, Loris wasn’t able to avoid him and collided. I’m sorry for them both, especially for our rider, who hit his painful shoulder. It’s also a shame for Randy. He had a good race pace, and he easily could have been in the group with Bautista, Barbera, and Hayden, but Abraham’s crash at the start of the race compromised everything. Performance aside, sometimes bad luck gets in the way.”

“Once again I have to say that I’m disappointed after a race. I could have been in the top five or six positions, but instead I finished the race in twelfth place. When Abraham crashed, I couldn’t do anything but go off, and after that I was able to make up a lot of seconds and some positions. I had almost caught the group in front and was pushing really hard when I made a mistake and lost everything I had gained. We’re not very fortunate, that’s for sure.”

“There’s little to say. I crashed on my ‘famous’ right shoulder and suffered another dislocation as a result. It hurts a lot, even with the pain-killer I received. After the Misano race, I wanted to try to at least finish the race, but instead things went like they did. At this point, my presence in Japan is in serious doubt, but I still hope to recover in time.”