Fourth Row For Both Ducati Pramac Rider At Phillip Island 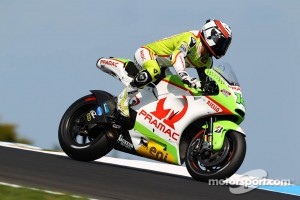 It could have been better after the first half of the qualifying session, but the tenth and eleventh position conquered respectively by Loris Capirossi and Randy De Puniet is a good result. Both riders were in the first positions until the last twenty minutes, but couldn’t make it to improve enough at the end. The Italian preferred to don’t risk as his right shoulder was hurting, while the Frenchman had to switch from bike one to the second due to some technical complications. Nothing to worried about but with the time running fast the best choice was to change bike. Tomorrow the race will begin at 4pm local time and the Ducati Pramac Racing rider will try all possible to conclude in the top ten.

“A pity as I am sure Randy could have conquered ad least the third row. We had some technical complication while starting bike number one and as there wasn’t much time left we decided to go for bike two. Randy didn’t have the same feeling and needed more time to adjust to the second bike, but anyway the results registered by him today and yesterday’s give us good hopes for tomorrow’s race.”

"It was hard today as the shoulder gives me pain. Also at the end I had the time to try another fast lap but I choose to stay where I was, which is anyway a good place. The bike reacts well on this track even if in some part we must improve. The Team has also worked really and today I enjoyed again riding. It has been rare this year to have fun while riding, but I hope I will have some other chances before the end of the season."

"The plan was to push at the beginning in case it was going to rain during the practice. We did well and were fast straight away being up front in the first six positions for a while. The weather kept dry and when it was time to use the last two soft tires we found some problems starting bike number one, the one I was using. So we had to switch to bike two and the feeling wasn’t the same. We were quite unlucky as I am quite positive the third row was a sure thing. Hopefully we will get back the luck we miss out today during the race!"