Sixth Position In Australia For De Puniet. Capirossi Ninth Coming Back From Injury 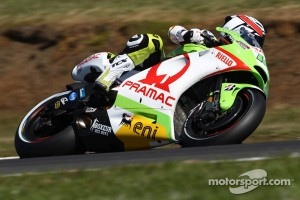 Day full of surprises at Phillip Island, where climatic conditions have affected the outcome of the race today. On the positive side for the Pramac Racing Team that has achieved the best result of the season finishing sixth and ninth respectively with Randy De Puniet and Loris Capirossi. The Frenchman had a good start and was in eighth position until some rain has made him go wide and come back on track in the rear of the classification. Randy fought in the group and in the last few laps when the rain again became more intense on the track, he managed to ride well with his bike and finish in sixth place. Capirossi made a good start at being on the first corner in third place, but then he had to give away to faster riders at that time. With four laps to the end, when a heavy shower hit the tracke, Loris has tried to change bike with wet set, but the track wasn’t wet enough and this denied him the opportunity to go beyond the ninth place. However, a good result looking ahead to the last two races of the season, in seven days in Malaysia and in Valencia in three weeks.

“Today we achieved the best result of the season even we must not denied ourselves because it was very influenced by the race itself, between the rain and the absence of the injured riders. Let's say that of all the times we were hit by bad luck and injuries, there is now good luck. We could collect more this year and we hope that this race could lead to a successful end of championship. Both Loris and Randy deserve it for all the effort they have put in.”

"I am very happy with how it went today. Yesterday we were very unlucky in qualifying session and today things have turned in our favor. At the beginning of the race I lost a little time to overtake Loris, but once I made it, while trying to reach Edwards and Hayden, a little bit of rain made me go wide and this made me lose about ten seconds. So I fought with the group for the ninth position until four laps left in the race when the rain was back on the track. I saw the other riders go as fast as if the track was dry and so I saw them slipping in front of me one by one. In addition, some rider have returned to the pits to change bikes, but I had confidence to continue with the bike with dry set up and this helped me to conclude in an excellent sixth place!”

"I started well but after a few laps between the pain at my shoulder and the weather changing I tried to manage the race to complete it. When there was four laps left I felt heavy heavy rain coming down just before the final straight and then I thought it was appropriate to enter the pits to change bike. Unfortunately it ended up not being the right choice because I probably could have finished the race a couple of positions ahead, but the ninth is still satisfactory considering my physical condition.