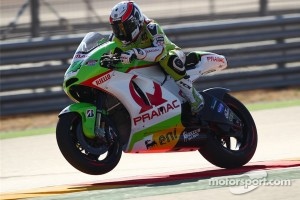 The MotoGP championship moves to Japan for the first stop on the four-race stretch that will conclude the season. Loris Capirossi is forced to miss the Japanese round due to the right-shoulder dislocation suffered at Aragon. The MotoGP veteran will rest in hopes of recover for the Australian GP. Twenty-nine-year-old Australian Damian Cudlin will ride in his place. Randy De Puniet is ready to take on the Motegi track, where he has posted two podiumfinishes in the past (a third place in 250cc, and a second place in MotoGP).

“Motegi is a fairly complex track, with its many stop-and-go sections that will certainly demand a change to the bike’s setup. Randy has done well here in the past, so we expect a good showing from our Frenchman.Meanwhile, it will be a good opportunity for Damian Cudlin, who will substitute Loris at this race, to showcase his talents. He’s a good guy, and we had the opportunity to get to know him a little last year in Moto2, where he raced at the Sachsenring GP.”

“I really want to finish out this season as well as possible. I’ve been unfortunate in many races, and I’ve committed errors in others. But we worked well in the last race, at Aragon, and I hope to also start Motegi off on the right foot. It’s one of my favorite circuits, and I’ve had some good results there in the past.”

"It's hard to put into words what this opportunity means to me. I've dreamed about starting in MotoGP since I was a boy, and until now it's been just that- a dream. Now it's become a reality and to be honest, I'm still in shock! I'm under no illusions about how difficult this race will be. I've never ridden a real MotoGP bike before and I've never been to Motegi either, so realistically my expectations can't be too high. I just want to do the best job I can, enjoy the experience, and just see what happens. I've really got nothing to lose, so why not? I don't know what I've done to deserve this. I still can't believe I'll be replacing Loris Capirossi- I had posters of him on my wall as a kid! I just want to thank Sito Pons for recommending me, the Pramac Racing Team for giving me a chance, and also my current BMW Team for allowing me to use this opportunity. I hope I can make everyone proud that they took a chance with a guy like me."

Aspar travels to GP of Japan