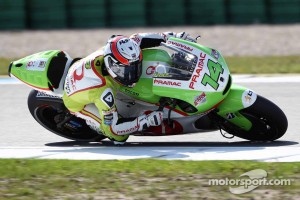 The starting grid for the Misano Grand Prix was finalized during this afternoon’s qualifying session. Randy De Puniet turned in the fourteenth-best time (1:34.870). The Frenchman lost the front and fell just a few laps into the qualifying session, losing the opportunity to post an good lap. Loris Capirossi finished the session in sixteenth place (1:35.502), and he’ll start from the sixth row.

“It’s a shame, Randy was going well on the bike we started qualifying with, but risked a bit too much in a corner and went off the track. Then with the second bike, he had a hard time finding his confidence because the setup was a little different. We hoped to be able to start from the third row, but we weren’t able to drop the last two or three tenths. We’re confident for tomorrow, although it will be hard because there will be many riders to battle with.”

"I’m dissatisfied and angry for how things went. I fell on the eighth lap, when I was going quite well, maybe on my way to a very good time. I wasn’t able to find the same feeling on the second bike, especially with the front. We made additional changes, but there wasn’t enough time left for me to improve my time. I very well could have started from the third row, but unfortunately the early fall hurt my qualifying session a lot.”

“Today went the usual way: the final piece was missing. We’re all very close, and then when the time comes to cut away a tenth or so, I’m never able to do it, for different reasons. When I try to lower my time, I try to be more aggressive, but this bike doesn’t work with force. Instead, it becomes difficult to ride. It’s hard; I’ve been riding a certain way for 22 years, and changing now isn’t easy. We have a pretty good race pace, so tomorrow we’ll try to make some changes and see what happens.”