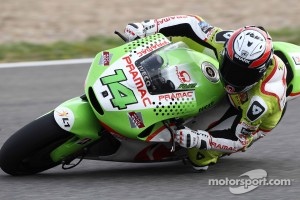 It was truly an unfortunate weekend for Loris Capirossi, who wasn’t able to finish the final Italian Grand Prix of his career. The MotoGP veteran had to return to the garage almost immediately due to sprocket damage that was caused by the chain stretching. Once he was back on track, he realized that the gap to the others was extremely difficult to make up, and he dropped out of the race 20 laps from the finish. Randy De Puniet didn’t have the same feeling with the bike that he had at Indianapolis, and he finished the race in fourteenth place.

"We used the same bike that we did in qualifying yesterday, but in both the warm-up and the race, Randy didn’t find the right feeling, especially with the front tyre. At least we made it to the finish. We don’t have many opportunities to try various solutions at the moment, so we have to be happy with what we have."

"I’m disappointed. After Indianapolis, I thought things would go better, but this weekend was really negative in terms of my feeling with the bike. Even the heat didn’t help me, but what really didn’t work was the front end. I wanted to finish better, like in Indianapolis, where I was able to get into the top ten. I must forget this race in a hurry and think of Aragon, with the desire to do well."

"Today was another unfortunate day. We managed to do something good during the warm-up, but the race was really a disaster. I had a problem with the clutch on the start, and then another one with the chain as a result. I came back to the garage to try to fix the situation, but it was useless because the gap to the others had become huge in the meantime."

How Verstappen and Hamilton are viewing the F1 title run-in