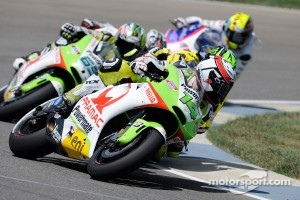 The world championship returns to Spain for the 14th MotoGP round of 2011 with the Aragon Grand Prix, which is the penultimate European round on the calendar. The MotorLand Aragon circuit, added to the series just last year, was designed by German architect Hermann Tilke, renowned guru of motorsports circuits all over the world. Last year Pramac Racing finished the race in tenth and fourteenth place, respectively, with riders Espargaro and Kallio. This visit to the track will be the first (and last) for Loris Capirossi, who missed last year due to injury.

"It will be interesting to see how Loris will adapt to this track. There are so many turns and four straight to try to unleash the power of the bike. Randy has the qualities to get a good result."

“At 38 years old, and a few races away from my retirement, it’s funny to think of myself as a newcomer. It will be my first time at Aragon, as I missed last year’s race. It will be interesting to get to know another track, but of course I’ll be starting off with a disadvantage compared to the other riders. I’ll give it my all, like always. I want to finish out my career with a smile.”

“I’m still a little disappointed for the misstep at Misano. After the nice race at Indy, I thought I could do it again in Italy, but something didn’t go right. We must do a good job and try to immediately find the right setup for the bike at Aragon. I like the track, which is very complex and technical. I want to get a nice result.”