Stoner on top again in Phillip Island warm up 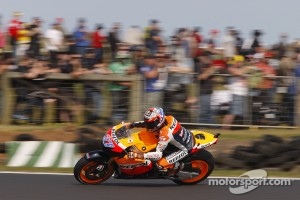 The Repsol Honda rider led the twenty minute warm up session Sunday morning as he prepares for another home win, leading the pack at the Iveco Australian Grand Prix ahead of Jorge Lorenzo and Dani Pedrosa.

Pole starter Casey Stoner, who could possibly wrap up the 2011 World Champion title later today, recorded the fastest time of the outing with a time of 1'31.261 in front of his home crowd, eight tenths behind his pole time of yesterday. The Australian was one tenths ahead of Yamaha Factory Racing’s Lorenzo, who crashed at the exit of Turn 12 on his final lap of the session, high siding his bike and coming to rest on the edge of the circuit. Dani Pedrosa (Repsol Honda) followed in third with a time of 1'31.779.

Valentino Rossi (Ducati Team) ranked fourth in the outing, half a second behind his Pedrosa, though still an improvement on yesterday which saw the Italian finishing qualifying in 13th. Marco Simoncelli (San Carlo Honda Gresini who will start the race from third on the front row, ranked fifth in the outing,ahead of the second Ducati Team rider, Nicky Hayden.