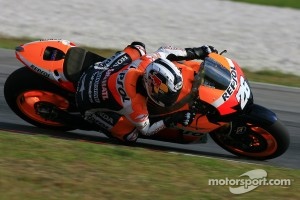 Dani Pedrosa continued his domination of the MotoGP field on a sizzling day two of the Shell Advance Malaysian Grand Prix, ahead of Marco Simoncelli and Andrea Dovizioso in another Honda sweep of the top positions in FP3.

Repsol Honda’s Pedrosa led the third and final practice before the afternoon qualifying a half second off his untouchable time set on Friday, though the Spaniard was still a comfortable 0.265s clear of Marco Simoncelli (San Carlo Honda Gresini Team) who was runner-up in the session with a time of 2'02.034.

Andrea Dovizioso (Repsol Honda) ranked third in the field for as many times this weekend, 0.047s adrift of Simoncelli. Newly crowned World Champion team mate Casey Stoner cruised to fourth position with a time of 2'02.169 to complete a top four Honda sweep.

Ducati Team’s Nicky Hayden made big strides to improve after ranking 11th of the day on Friday lapping over a second quicker to land fifth with a time of 2'02.249 on Saturday morning. Álvaro Bautista (Rizla Suzuki) followed by 0.094s in sixth, with Colin Edwards (Monster Yamaha Tech 3) landing seventh ahead of Valentino Rossi (Ducati Team), the Italian eight tenths behind the leading session time set by Pedrosa.

A recovering Ben Spies (Yamaha Factory Racing) crashed in turn one with 13 minutes remaining, the Texan was back on his feet immediately though opted not to rejoin the session.

John Hopkins, who participated in both practice sessions yesterday, was entered as a wild card for the Rizla Suzuki team for the second time this season, but the finger he broke during his appearance at the Czech Republic in August has re-broken, forcing the Anglo-American to withdraw from participation this weekend.