Former 250cc Word Champion and one of the most exciting riders in the 2011 MotoGP paddock, Marco Simoncelli has tragically passed away from injuries he sustained in a second lap crash at today’s Shell Advance Malaysian Grand Prix at Sepang.

Simoncelli was left fighting for his life following a horrific crash at turn 11 while in front of Colin Edwards (Monster Yamaha Tech 3) and Valentino Rossi (Ducati Marlboro). ‘Super Sic’ lost the front end of his bike and while trying to hang on and remount, he was dragged into the path of Edwards and Rossi who had no room to take evasive action and both riders hit Simoncelli and his bike in an impact that sent Simoncelli’s helmet flying down the track.

When the race was initially red-flagged it was thought that a re-start was planned following reports that Simoncelli was moving but it quickly became apparent that something was wrong when Race Direction decided to cancel the re-start. It was later confirmed that efforts to resuscitate Simoncelli were unsuccessful and the rider passed away at 4.56pm local time.

Today we are left devastated.

This was Simoncelli’s second year in MotoGP and the 24-year-old took his best career finish in the premier class last time out at Philip Island in Australia where he grabbed second place. The Italian rider had only recently signed another deal with Gresini to ride for the team in 2012 on a new Honda RC213V.

This year looked to be the season where Simoncelli was ready to announce his arrival on the main stage of World Championship Motorcycle Grand Prix racing and was ultra-fast from day one of this year’s campaign. ‘Super Sic’ as he was fondly known heavily impressed with his outright speed this year and was the only satellite rider from any manufacturer that was able to keep in touch with the main factory riders.

The wild-haired Italian brought an injection of excitement to the MotoGP Paddock once again and Simoncelli quickly became known as a tough rider who wasn’t afraid to make a pass anywhere on track. He lit up any press conference that he spoke at and wasn’t afraid to speak his mind when asked about a certain pass during a race or his thoughts on another rider. 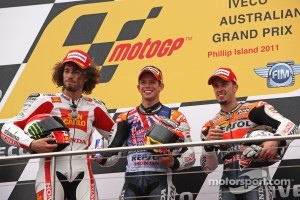 Simoncelli’s passing is the first in the premier class since 2003 when in Daijiro Kato, who was also riding for the Gresini team at the time, died in an incident at the Japanese GP at Suzuka. Last year Moto2 rider Shoya Tomizawa died at the Misano GP in Italy after he was also hit while crashing on tack.

The San Carlo Honda Gresini team put out a tribute shortly after the tragic news that simply read: Ciao ‘Super Sic’ while the official MotoGP statement read: “Everybody involved in MotoGP extends its deepest condolences to Marco’s family, friends and team at this tragic loss.”

Honda Racing Corporation's Mr Nakamoto solemnly said, "I just don't know what to say, words escape me. Marco was a very nice guy and a very talented rider. Sometimes I was a little harsh with him, for example after his first MotoGP podium in Brno when I told him: "Lucky podium!" and he was so angry... but I wanted to motivate him as I knew he was able to do even more. I was thinking that when he won his first race we would have been able to celebrate together... Now I just want to say thank you to Marco, for what you gave me and pass my sincere condolences to his family and this very sad time.”

Meanwhile Taka Horio, General Manager of the Bridgestone Motorsport Department said, “Today we are left devastated. Our thoughts and prayers are with Marco’s family at this terrible, terrible time, and with his team. Words can do no justice to the emotion we are all feeling. The MotoGP family has lost one of its bright stars, a genuine character whose larger-than-life persona, charisma and unstoppable spirit were infectious, and we’ve all lost a great friend.

“We worked closely with Marco for his first two years in MotoGP and it was clear that he was a true racer, something he proved again and again this season. Determined to the end, and a great showman. His ascent through the field in just two seasons has been fantastic to watch, testament to his raw talent, ability and dedication to the sport he so loved. We remember fondly the tenacity and spirit with which he raced, and he will be sorely, sorely missed,” Mr Horio added. 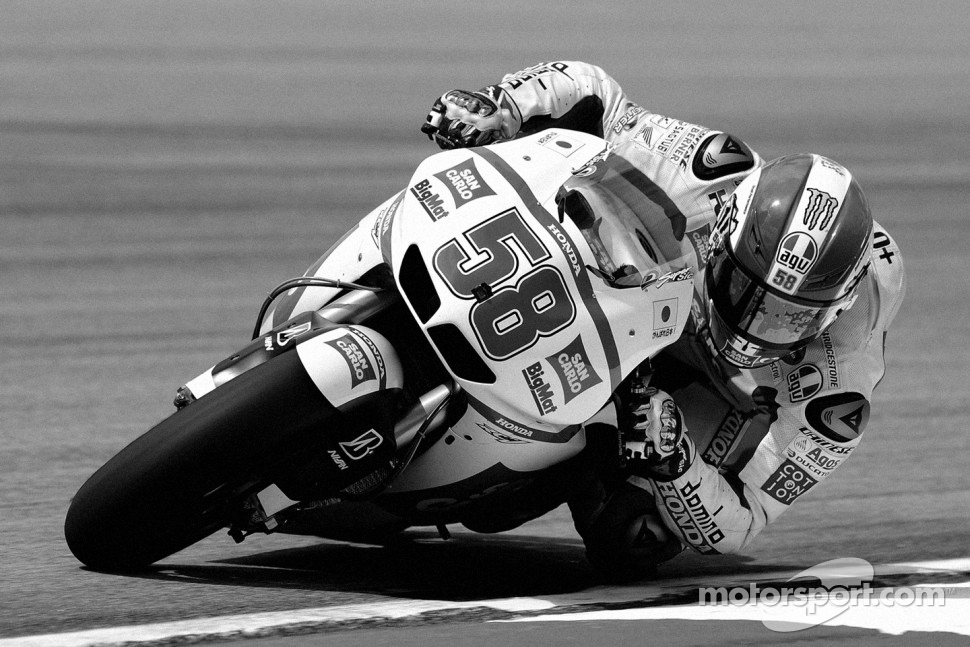