Round 17 cancelled after crash leaves Marco Simoncelli in ‘serious’ condition

MotoGP Race Direction has decided to cancel the re-start of round 17 of this years’ MotoGP World Championship where a second lap incident involving Marco Simoncelli (san Carlo Honda Gresini), Colin Edwards (Monster Yamaha Tech 3) and Valentino Rossi (Ducati Marlboro) has left Simoncelli in what is being described as a ‘serious condition’.

Simoncelli lost the front of his RC212V on the second lap at turn 11 while chasing down Alvaro Bautista in 4th position and while holding onto the bike in an effort to re-join the Italian and his bike came across the track right in the line of Edwards and Rossi who both hit the bike and rider leaving Edwards on the ground and Rossi staying on his bike but being forced off track. 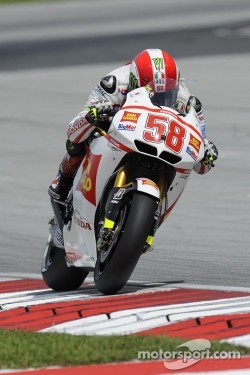 Both Edwards and Rossi were left without anywhere to go when Simoncelli and his bike came back across the track and he appeared to be struck by both Edwards’ and Rossi’s machines with Simoncelli’s helmet then being knocked off following the crash.

The Race had started in familiar circumstances where Repsol Honda’s Casey toner grabbed the holeshot from teammate and pole position man Dani Pedrosa with Andrea Dovizioso in third. Simoncelli and Bautista immediately began their battle for 4th position and had made a number of passes on each other before Simoncelli suffered his crash on lap 2 leading to the Red Flags being waved immediately.

The riders in the paddock were quickly informed of the situation and Race direction kept the teams informed on the situation as it unfolded. During this time Colin Edwards’ condition was described as the American rider having sustained a dislocated shoulder and was not going to re-start the race. Rossi was not reported to have any injuries from the incident.

The teams in the paddock were preparing themselves for a race re-start that was originally announced would go ahead but as Simoncelli’s condition was further monitored it was decided that the full attention of the Medical Centre was needed to attend to the Italian and Race Direction took the decision to cancel the race. Shortly after the decision was made the head of Dorna, Carmelo Ezpeleta said that Simoncelli was ‘in a bad way,’ although no official statement has yet been made on the rider’s condition.

Editor's note: The news that Marco Simoncelli did not survive has been announced and story to follow. RIP Super Sic!