Stoner set a blistering pace throughout the hour-long session and with weather conditions remaining dry, the Australian would eventually set his pole time of 1m 31.861s, having led for most of the session. Teammate Pedrosa threatened to take the top spot a number of times but as the session progressed it was Stoner who pulled away and Pedrosa had to settle for second place with a best time of 1m 32.875s.

Despite wrapping up his second MotoGP title Stoner said there was only one position he would be happy with. He said, “Of course I'm really happy with pole position today, I'm still hungry to win and get pole positions, after all this is why I line up to go racing, winning the Championship is the bonus at the end of the season, but I still try my best in every session and every race. I took some less risks yesterday in the wet, as I didn't feel we were making any progress in the conditions.

“Today was also difficult, there was a little rain in all the sessions, this morning there were some wet patches on the track and it was hard to know where to push, then the same this afternoon with some rain on the track, you're never 100% sure how far you can push. We felt comfortable though and the feeling in the bike was pretty good, with a similar set up to the test we had here last year and we put in a good lap. Now we'll have to see what the weather does tomorrow and take it from there, but we remain confident,” Stoner added.

Pedrosa was happy with his second place but is still looking for something more from his RC212V saying, “It was tricky out there because we had a little rain by the middle of the session, we were lucky because the track stayed dry and we were able to do one more practice on slick tyres. Casey was very fast and consistent. I'm happy with second position on the grid, it's a good place to start, but I'm not totally satisfied with the set up of the bike yet, we need to improve the front tonight with the mechanics. I want to have a good race tomorrow, it's the last one and in front on my fans, so I'll do my best to finish the season in the best way.”

Spies enjoyed a return to form this weekend after sitting out the last two races due to injury. The American rider snatched the final place on the front row with a best lap of 1m 33.057s ahead of Pramac Racing’s randy de Puniet, who was himself lapping at a consistently faster pace this weekend than that of any other race weekend this year. The Frenchman’s best time was 1m 33.118s and only bettered by Spies in the dying minutes of the session. 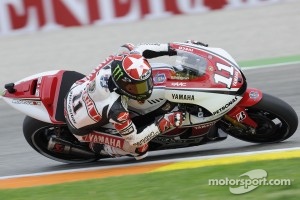 Spies is hoping tomorrow’s race is under dry conditions so he can make the most from his front row start saying, “Qualifying was really hectic today for all the riders. There was a sprinkling of rain all the way through which makes you very nervous about how much to push. I have to say thank you Yamaha for a great bike. It’s working great here so we just need to pray for some dry time for the race. We’re going to get some rest tonight and try to make sure we end the season on a high tomorrow.”

Alvaro Bautista had another strong session and took 5th spot with a lap of 1m 33.443s on board his Rizla Suzuki GSV-R while the final place on the second row was secured by Ducati Marlboro rider Valentino Rossi with a best lap of 1m 33.478s. Rossi’s teammate Nicky Hayden starts from 7th place tomorrow after recording a 1m 33.656s lap time. Hayden heads the third row on front of Repsol Honda’s Andrea Dovizioso who set a best time of 1m 33.824s but the Italian rider was unlucky to crash on the final lap with no apparent injuries. Hector Barbera (Mapfre Aspar) starts in 9th with a time of 1m 34.186s.

The last spot in the top ten was secured by Cardion AB Motoracing rider Karel Abraham with his best time of 1m 34.265s to start ahead of his competitor for Rookie of the Year bragging rights, Cal Crutchlow (Monster Yamaha Tech 3) who set a 1m 34.329s time. Starting in 12th position tomorrow will be Loris Capirossi who is rounding off an incredible career with 22 years of World Championship motorcycle racing and the Pramac Racing rider showing no sign of slowing down, setting a best time of 1m 34.671s.

Capirossi starts his final MotoGP race ahead of Toni Elias (LCR Honda) who registered a lap time of 1m 34.680s to start in front of Hiroshi Aoyama on his San Carlo Honda Gresini RC212V with the Japanese rider still coming to terms, as is the rest of the MotoGP paddock, with the death of teammate Marco Simoncelli. Aoyama starts in 14th tomorrow ahead of Yamaha Factory Racing’s substitute rider Katsuyuki Nakasuga (1m 35.999s) who also had a fall at the end of the session but the Japanese rider didn’t appear to injure himself. The final position for the final race of the 800cc MotoGP era was taken by Josh Hayes (1m 36.042s) who is standing in for injured Monster Yamaha Tech 3 rider Colin Edwards.

Shortly after qualifying Dorna announced the official details of the tribute planned to honour Marco Simoncelli. At 10.10am local time on Sunday morning riders from all three categories of the World Championship will leave from Pit Lane as a group, and complete a lap of the track in honour of Simoncelli and leading the group will be Simoncelli’s good friend 1993 World Champion Kevin Schwantz on the Italian star’s RC212V.

Then as the riders near the finish line they will stop just short, with local authorities and representatives of MotoGP’s governing bodies (Dorna, IRTA and the FIM) gathering on the other side of the finish line alongside Simoncelli’s family and members of the Gresini team. Simoncelli’s father Paolo request for a ‘minute of chaos’ didn’t go unnoticed either as once the bikes have taken up their positions on the start/finish straight a two-minute Valencian Mascletà (a traditional firecracker display) will take place. 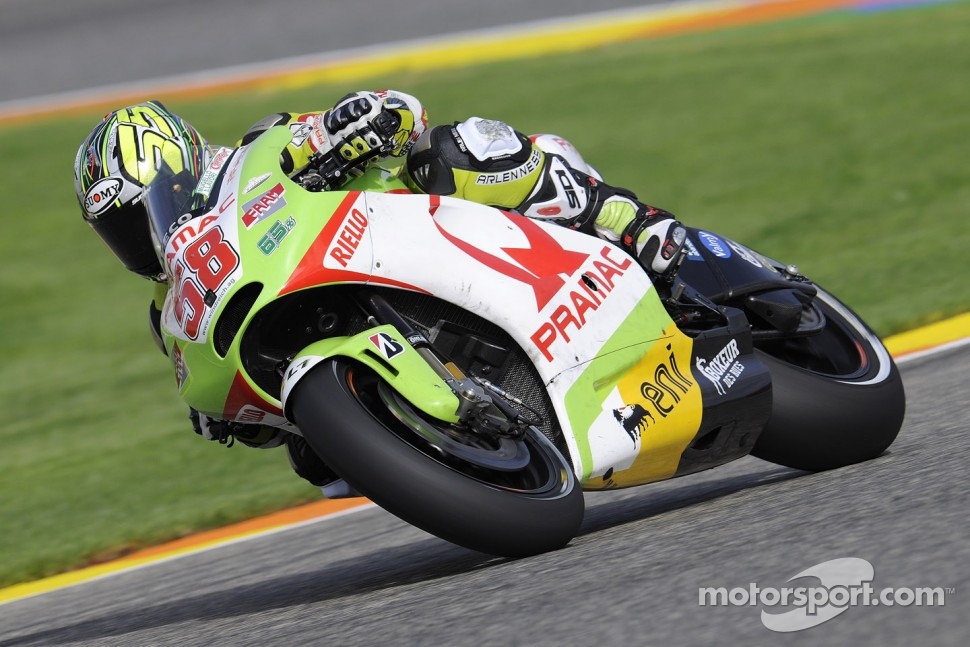