Casey Stoner got off to the best start possible for his home race, the Iveco Grand Prix of Australia at Philip Island where he topped the timing sheets on day one on front of his home crowd who are hoping to celebrate Stoner’s second MotoGP Championship title come Sunday.

Stoner will also turn 26 on Sunday so taking the title on home soil will make the victory even sweeter and he is already proving tough to keep up with this weekend after setting a fastest FP2 time of 1m 30.535s ahead of San Carlo Honda Gresini rider Marco Simoncelli (1m 30.912s) and reigning MotoGP Champion Jorge Lorenzo (Yamaha Factory Racing) who recorded a time of 1m 31.111s. 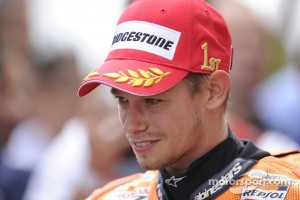 Despite a fall in FP1 Stoner was fastest in both sessions and Lorenzo follows the 2007 champion into second on combined times ahead of Italian Simoncelli in third overall. Stoner was upbeat about his performance but believes there is more to come from his Repsol Honda RC212V. The Australian also spoke about the bumpy track conditions that he and his team have to address.

"I don't feel totally comfortable with the bike today and I'm sure we can improve the bike a lot. The track is certainly a lot more bumpy than last year and I think it will be very difficult to get the bike feeling 100% as the circuit is making things worse,” said Stoner while adding, “In general we've found the Honda is better in certain aspects than what we had last year but with these bumps it's difficult to compare in other areas. We need to get the bike riding the bumps in the front a lot better, and also find some more rear grip. There is still a lot of work before we find the right race set up and we know.”

Monster Yamaha Tech rider Colin Edwards finished day one in fourth place overall with the American putting in a solid performance in his last season with the French-based team. Edwards sits just one place ahead of fellow countryman Ben Spies for the Yamaha Factory Racing team. Spies ended day one ahead of outgoing Repsol Honda rider Andrea Dovizioso who also voiced his discontentment at the bumpy nature of the track. 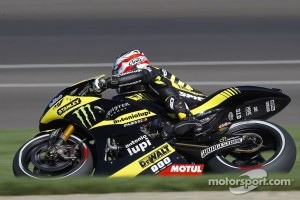 Sitting in seventh place on the timing sheets is Dani Pedrosa and his Repsol Honda RC212V that he and his crew just couldn’t improve the set-up on for the afternoon’s session but the Spaniard remains confident of an improvement tomorrow. Pedrosa finished just ahead of Hiroshi Aoyama who in turn sits one place ahead of Nicky Hayden and the Ducati Marlboro outfit. The top ten was rounded off by Pramac Racing’s Randy de Puniet.

Finishing in 11th place on day one was Alvaro Bautista and his Rizla Suzuki GSV-R while British rider Cal Crutchlow finished his first day in 12th place overall and ahead of Valentino Rossi who is having a tough time with his little finger that he injured in a first lap crash at Motegi, Japan last time out. Rossi finished the day one place ahead of his compatriot Loris Capirossi (Pramac Racing) with Cardion AB Motoracing rider Karel Abraham sitting in 15th.