Casey Stoner claimed his 11th pole position of this year’s MotoGP Championship in front of his home fans at today’s qualifying session for the Iveco Grand Prix of Australia at Philip Island. The Repsol Honda rider continued his untouchable form during the session to head the front row with main rival Jorge Lorenzo (Yamaha Factory Racing) in second and Marco Simoncelli (San Carlo Honda Gresini) in third.

Stoner can wrap up his second MotoGP championship this weekend and gave himself the best possible chance to secure the title on his 26th birthday during the hour-long session. The Australian worked on set-up for the first 30 minutes before putting in a soft qualifying tyre and securing pole position with his best lap being 1m 29.975s.

We're just going to go out there and concentrate on winning the race.

Stoner believes there is still more to come from his RC212V and is keeping a cool head for tomorrow’s race. "So far so good, we have a good race pace and the bike's feeling pretty good at the moment. We still need to improve the rear grip, but I think this is the same for everyone, we'd also like to get the harder rear tyre working better for the race,” said Stoner while continuing, “We began Qualifying with older tyres to understand where we are for the race and I'm quite happy as the lap times we were achieving were similar to Jorge and Dani who were on the new soft tyre. Then we put on the soft tyre for the first time since yesterday morning, everything felt good and we were able to improve our lap time consistently, but it's still difficult on the left side of the tyre and we're getting a lot of spinning and tyre degradation.

“We'll see what the weather does tomorrow, it's not looking too good right now but we'll adapt to whatever it throws at us. Jorge is strong everywhere we go and I think my chances of taking the Championship here tomorrow is pretty slim to be honest, we're just going to go out there and concentrate on winning the race,” The championship leader added.

Lorenzo was very happy with his best time of 1m 30.448s but admitted it is an uphill struggle to beat Stoner on his home track. “We did a very good job today. We tried many things and I believe we have the right set up for tomorrow. I have to thank my team who worked hard to make sure I have the best possible bike to fight with. The race will be very tough, it will be very important to be consistent with a good race pace. I will try to win, I know it will be very difficult here with Casey but I will try 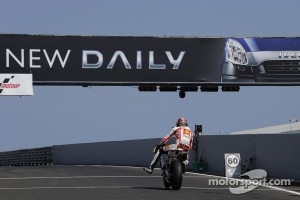 Simoncelli managed to stay on his bike today following a number of falls during the practice sessions but a best lap of 1m 30.599s gave him his first front row start since Mugello. “I am really happy because it has been a while since we started on the front row. We have been fast over the past two days although we have had a few crashes too. The day didn't start well because of the conditions, which were cold and windy, and that made it difficult. This afternoon we managed to do a better job and enjoyed an excellent qualifying session so my goal tomorrow is to push to the maximum from the start. Stoner looks untouchable at the moment but in racing you can never say never!” Simoncelli said.

Ben Spies (Yamaha Factory Racing) luckily walked away from a fall at over 100mph to get back on his spare bike to start tomorrow’s race in 7th place on a time of 1m 30.835s. Dani Pedrosa appeared to lose direction on his bike’s setup in the second half of the session and could only manage an 8th place start with a best lap of 1m 30.871s. Monster Yamaha Tech 3 rider Colin Edwards will start from 9th place on the grid with his best lap of 1m 31.237s.

Loris Capirossi (Pramac Racing) returns this weekend after being injured and was in the top 10 all session-long and starts tomorrow from 10th place (1m 31.583s) and his teammate Randy de Puniet sits one place behind him in 11th with a time of 1m 31.635s. Hiroshi Aoyama, who will race in World Superbikes next year, will start in 12th place tomorrow for his San Carlo Honda Gresini squad with a best lap of 1m 31.889s. Aoyama walked away from a heavy fall near the end of the session. 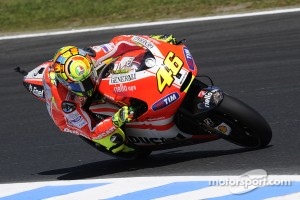 Lining up on the 5th row is seven-time MotoGP Champion Valentino Rossi (1m 31.980s) who can’t seem to go better than 13th place on his Ducati Marlboro GP11.1 with the Italian nursing an uncomfortable broken little finger from his crash in Motegi, Japan last time out. Starting just behind Rossi tomorrow will be Cal Crutchlow on his Monster Yamaha Tech 3 YZR-M1 with his best time of 1m 32.023s.

Karel Abraham Cardion AB Motoracing will start in 15th place with his best time of 1m 32.054s and the Czech rider was lucky to walk away from a crash near the end of the session. Toni Elias starts from 16th for his LCR Honda team with a best lap of 1m 32.503s and at the back of the grid is Australian Damian Cudlin who is filling in for Hector Barbera and the Mapfre Aspar squad. Cudlin had a big highside this morning in FP3 and although he was not within the 107% qualifying rule (1m 36.666s), he will be allowed to race tomorrow.